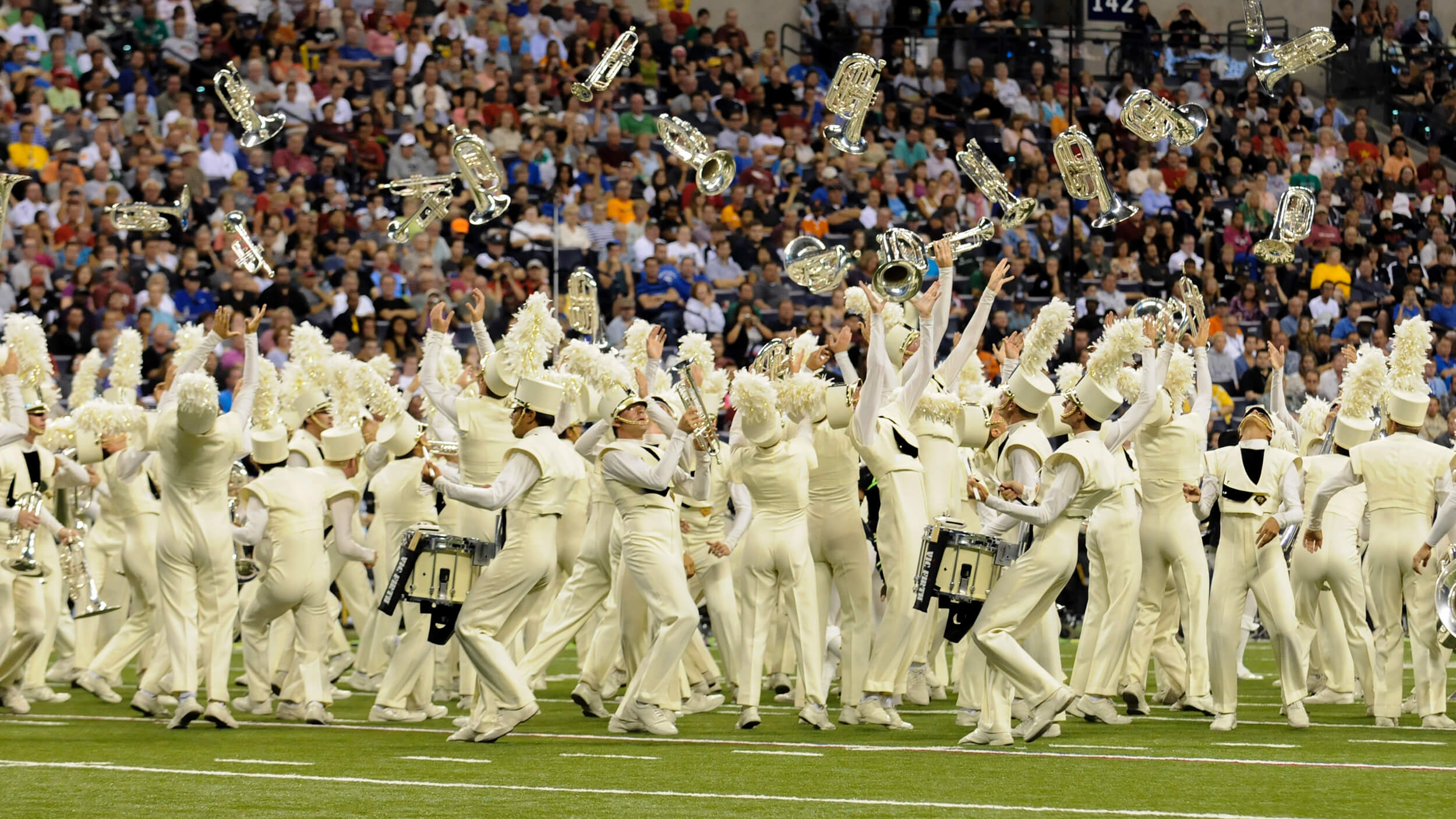 Over the last decade drum corps brass sections have continued to push the boundaries of excellence. These corps represent the tops, winning the Jim Ott Best Brass Performance Award at the DCI World Championships, factored by the average brass scores over the three nights of competition. 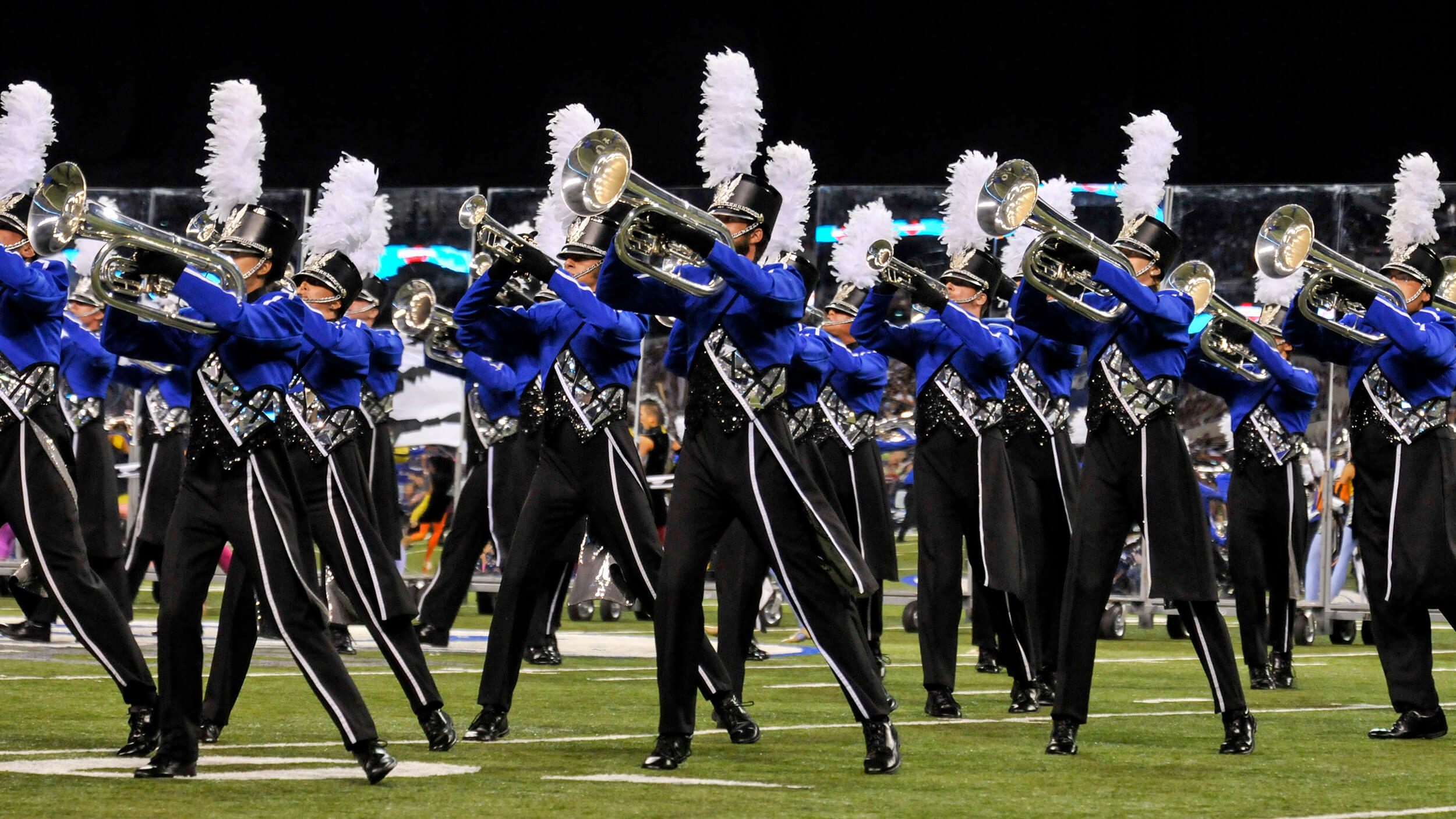 Just two tenths away from a perfect caption score on Finals night, Blue Devils’ brass line contributed strongly to the corps’ undefeated season. The music of Bob Graettinger — from the Stan Kenton Band’s Neophonic period of the mid-1960s — was no less a challenge to the ears of the audience five and-a-half decades later as it was when it was first introduced. 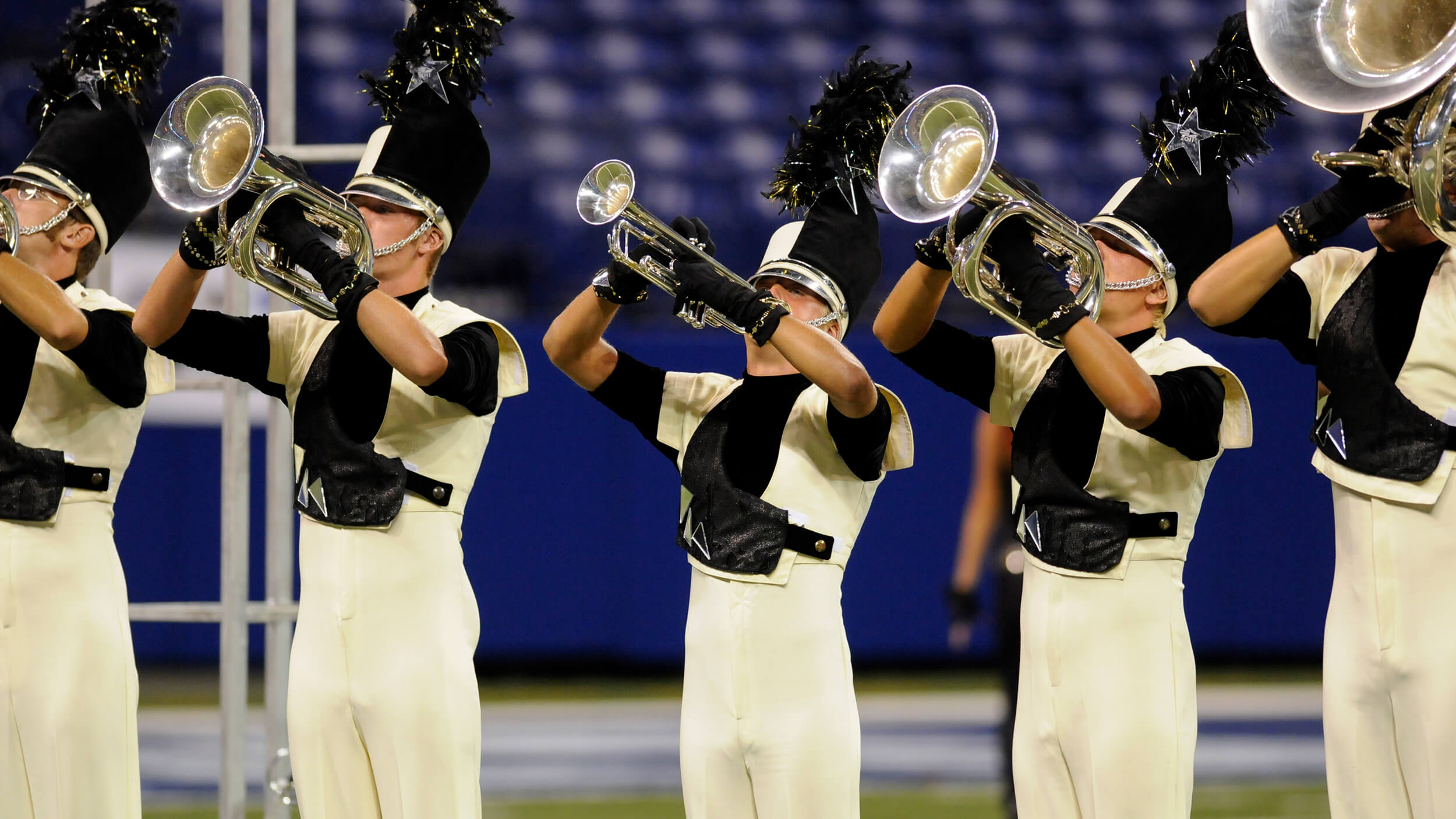 Rachmaninoff became the hippest composer around when given Crown’s “Rach ‘n’ Roll” treatment. The corps won brass despite being no higher than third in any other caption and placing fourth in music effect. An extended, impeccable triple-tonguing feature perhaps sealed the Ott Award for the fourth-place corps. 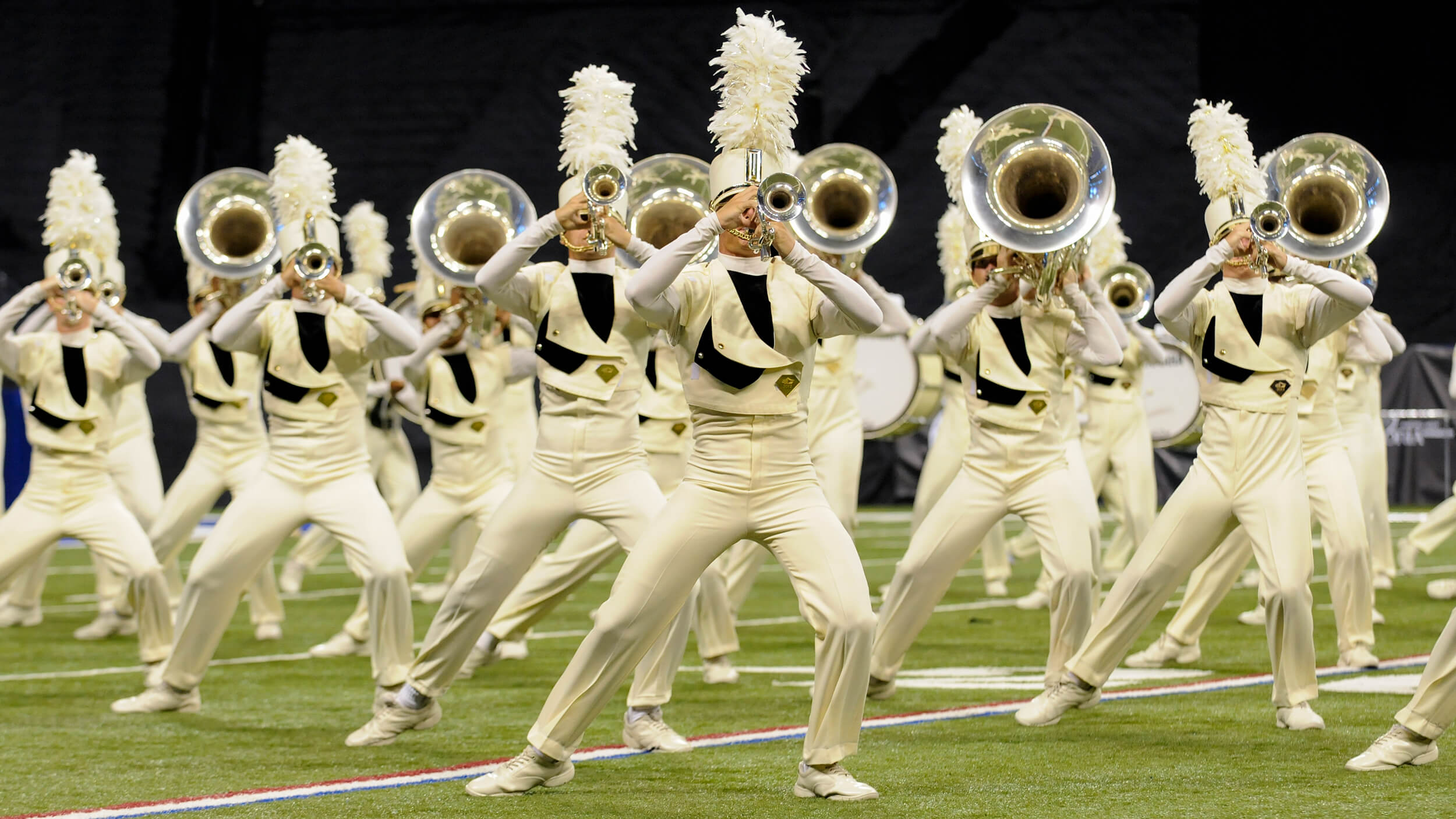 Aaron Copland’s “Fanfare for the Common Man" provided the inspiration for "For the Common Good," though that work in its original form wasn’t heard in its entirety until the end of the show. The second-place corps also took first in the music effect and music analysis captions on Finals night, but finished a quarter of a point down to the World Champion Blue Devils in music overall. 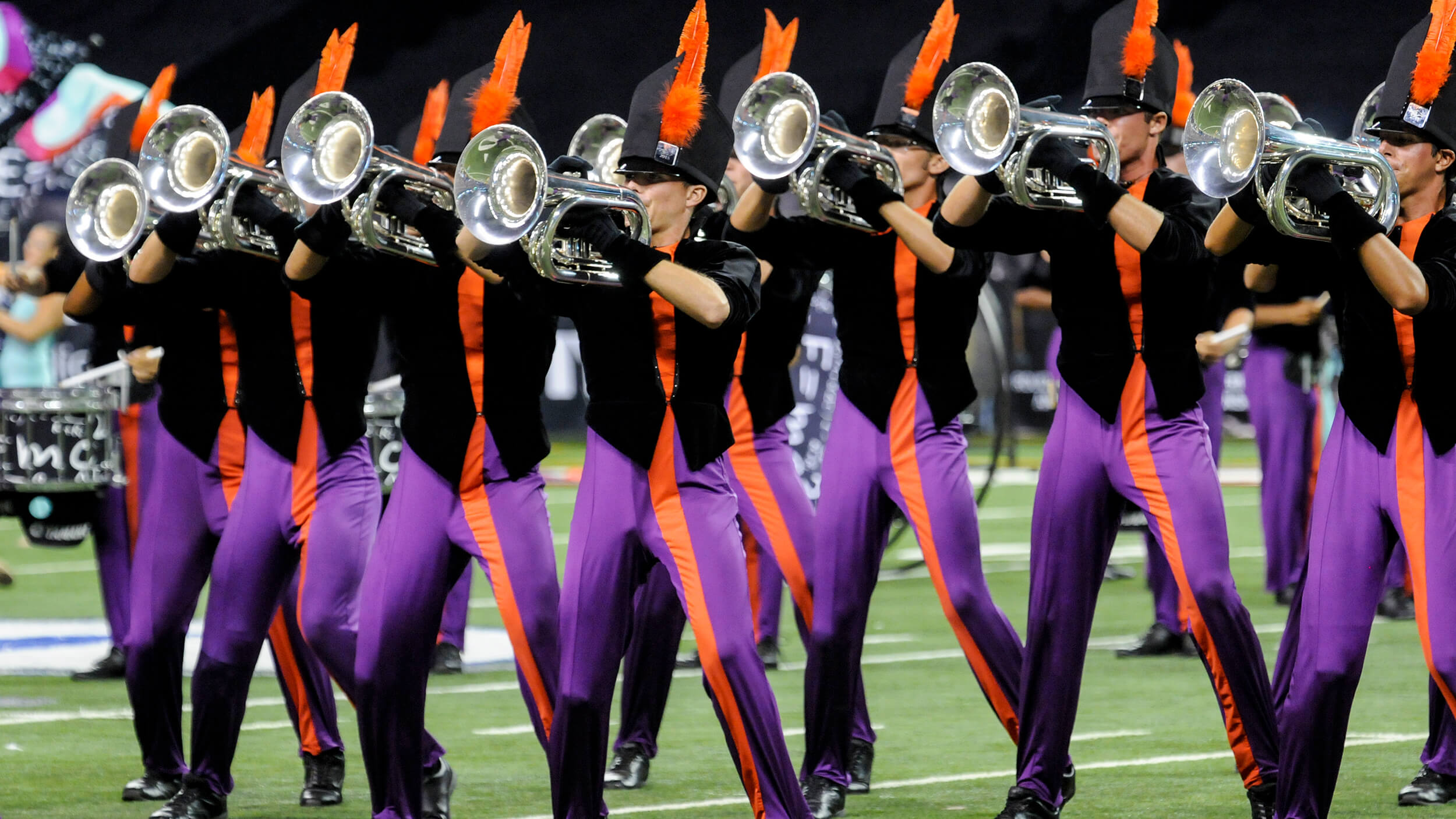 Crown’s horn line captured a perfect brass score of 20.000 at Finals, contributing to a perfect score from one judge in the music effect caption. Music from Philip Glass’ “Einstein on the Beach” was some of the most complex and rhythmically challenging music ever put on the field, and the searing passion of “The Abyss” drained the emotions of the audience. 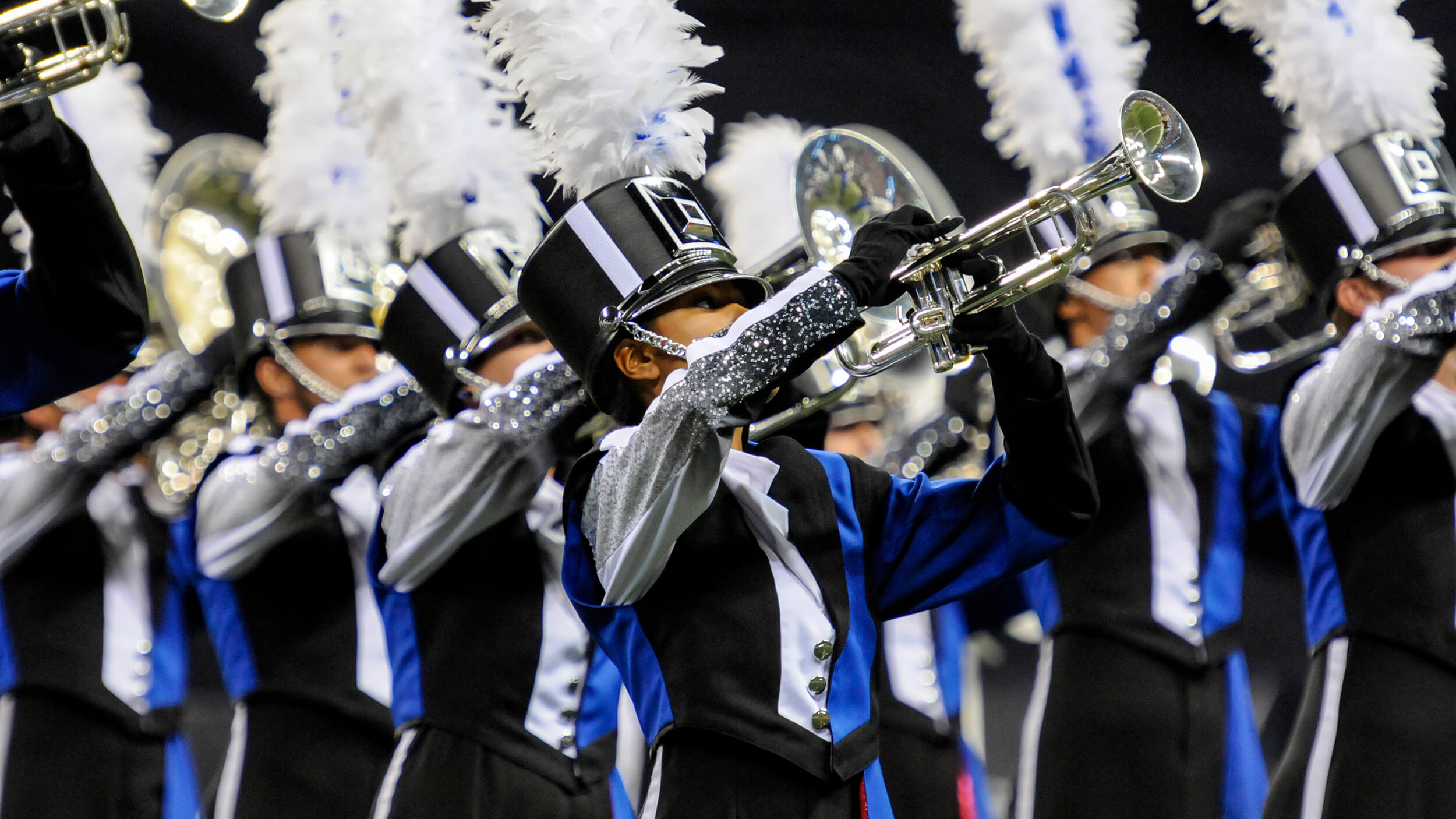 A score of 19.800 in brass at Finals contributed to Blue Devils earning a total score of 99.650, a new high that smashed the previous record by half a point. The corps commissioned famed bandleader Gordon Goodwin to write an original work for the show, and a particularly memorable moment from the horn line came when 40 trumpets played a fanfare coming out of a spinning film reel formation. 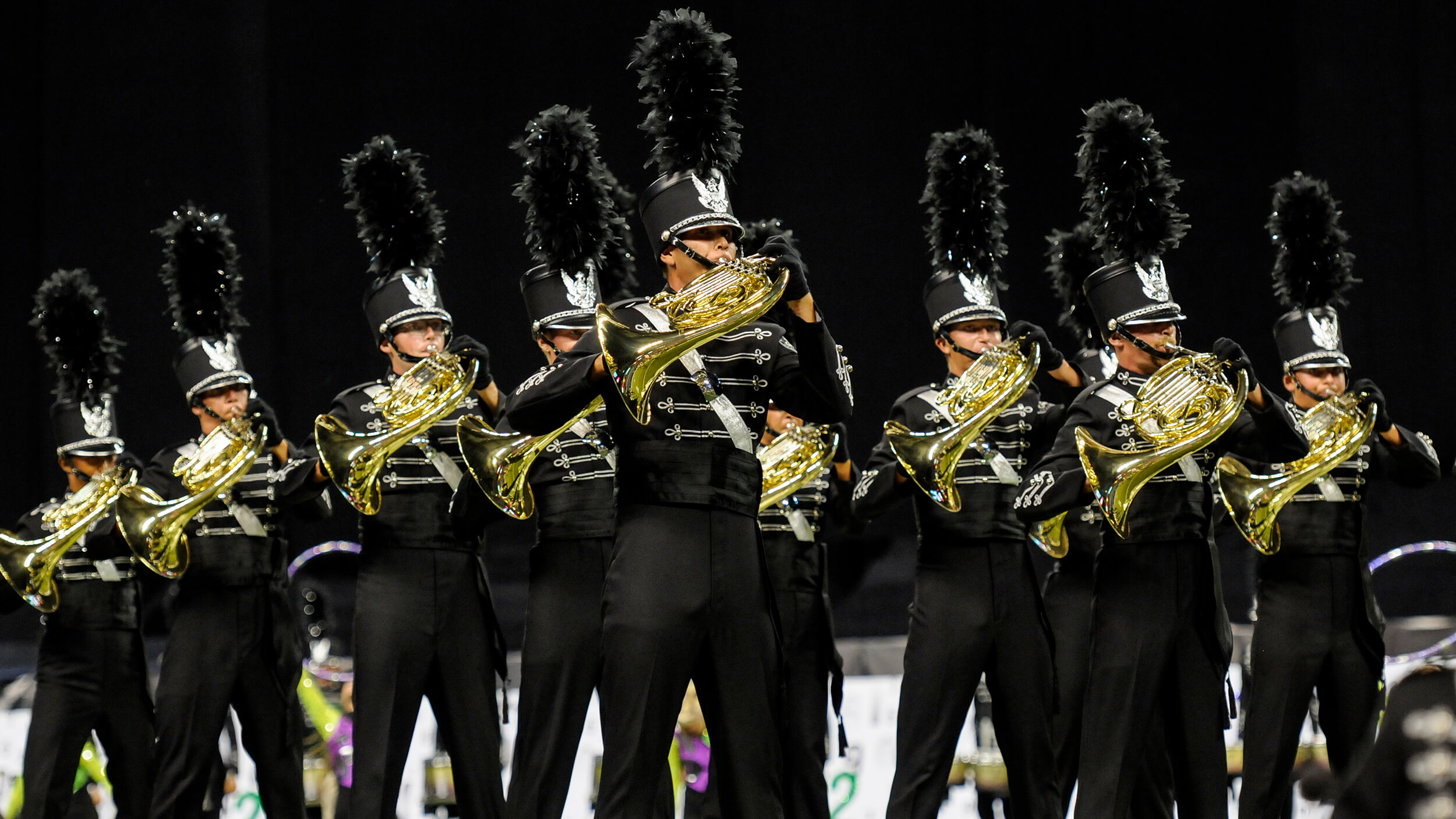 Earning the Ott Award despite the corps finishing fourth overall, Cadets' horn line impressed by playing and marching 186 beats-per-minute for four minutes during the opener, followed by a waltz that stayed at 236 BPM for an entire minute. Like Carolina Crown in 2013, the horn line impressively added 0.70 points to its brass score between Prelims and Finals. 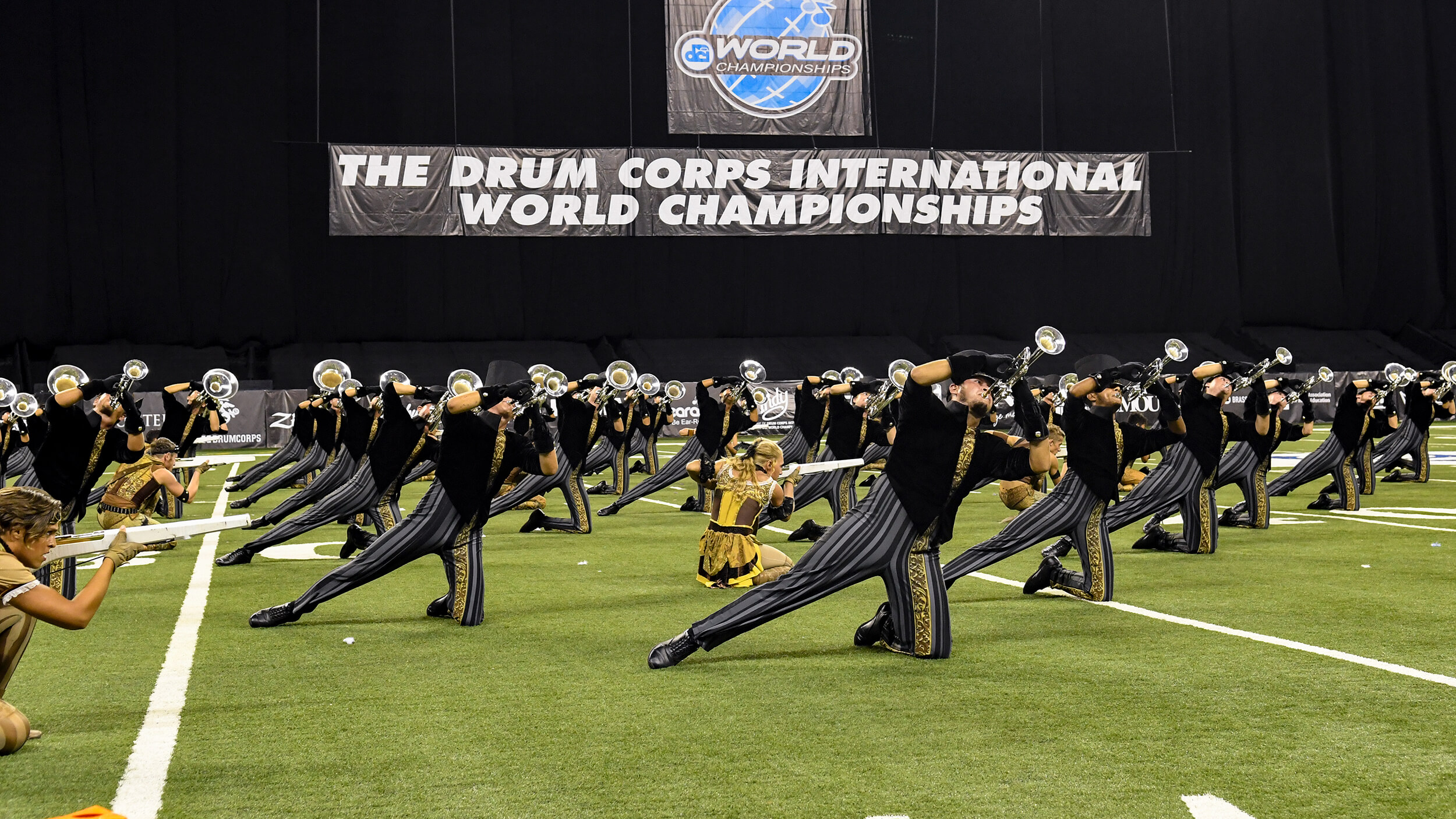 A tale of vengeance, mercy, and forgiveness in the Old West, Carolina Crown's "Relentless" music was inspired by soundtracks of 1960s “Spaghetti Westerns,” particularly those of Ennio Morricone for Sergio Morricone’s films starring a young Clint Eastwood. The corps placed third overall, just over a half a point under the first-place Bluecoats. 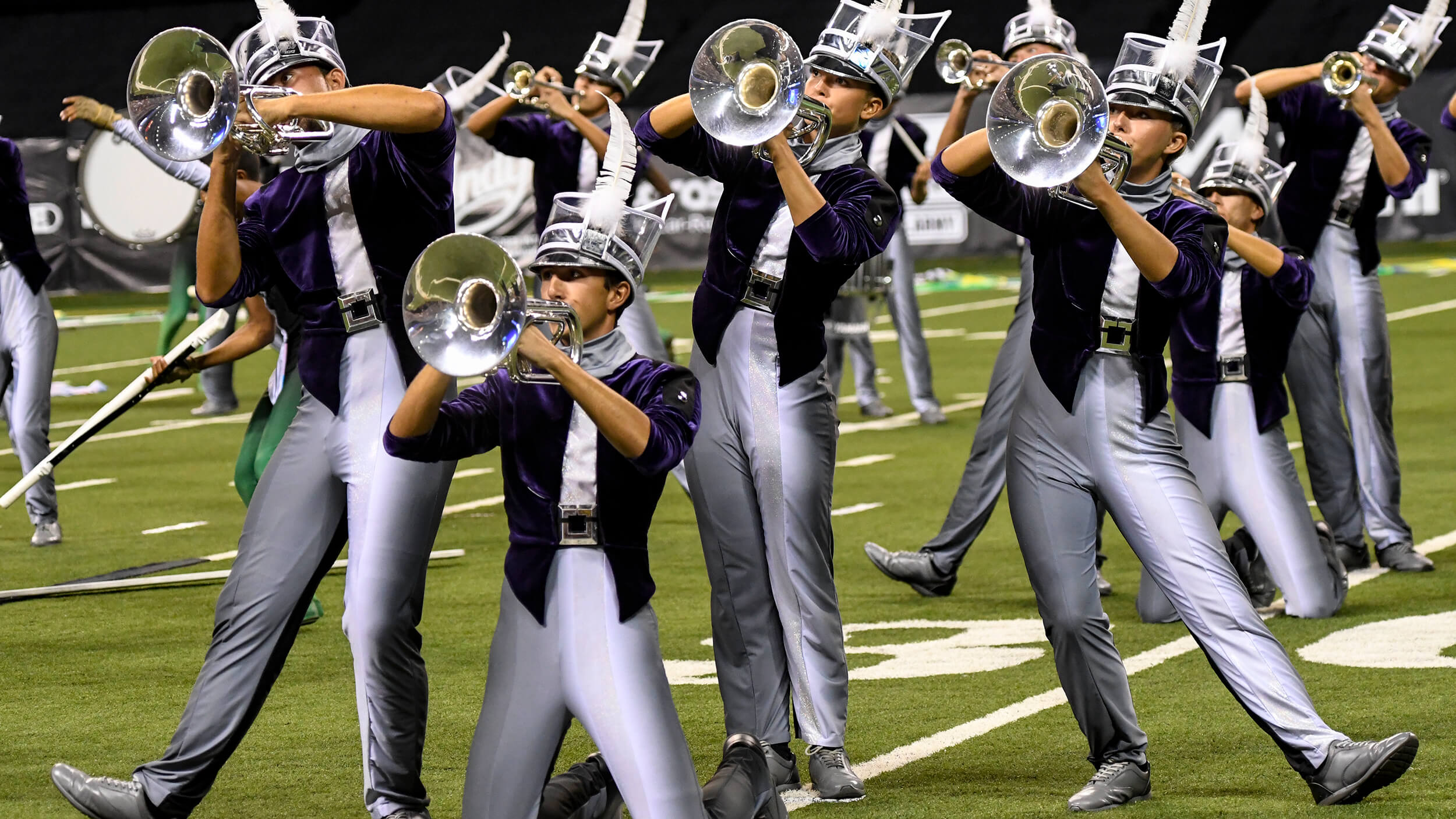 Carolina Crown once again captured the Ott Award in 2017 despite placing third in Finals, taking the brass caption by a tenth of a point over the first-place Blue Devils. An intriguing element of the brass arrangements in "It Is" was that most of the selections were never completed as the music was increasingly deconstructed along with the field itself.

Watch Carolina Crown's "It Is" 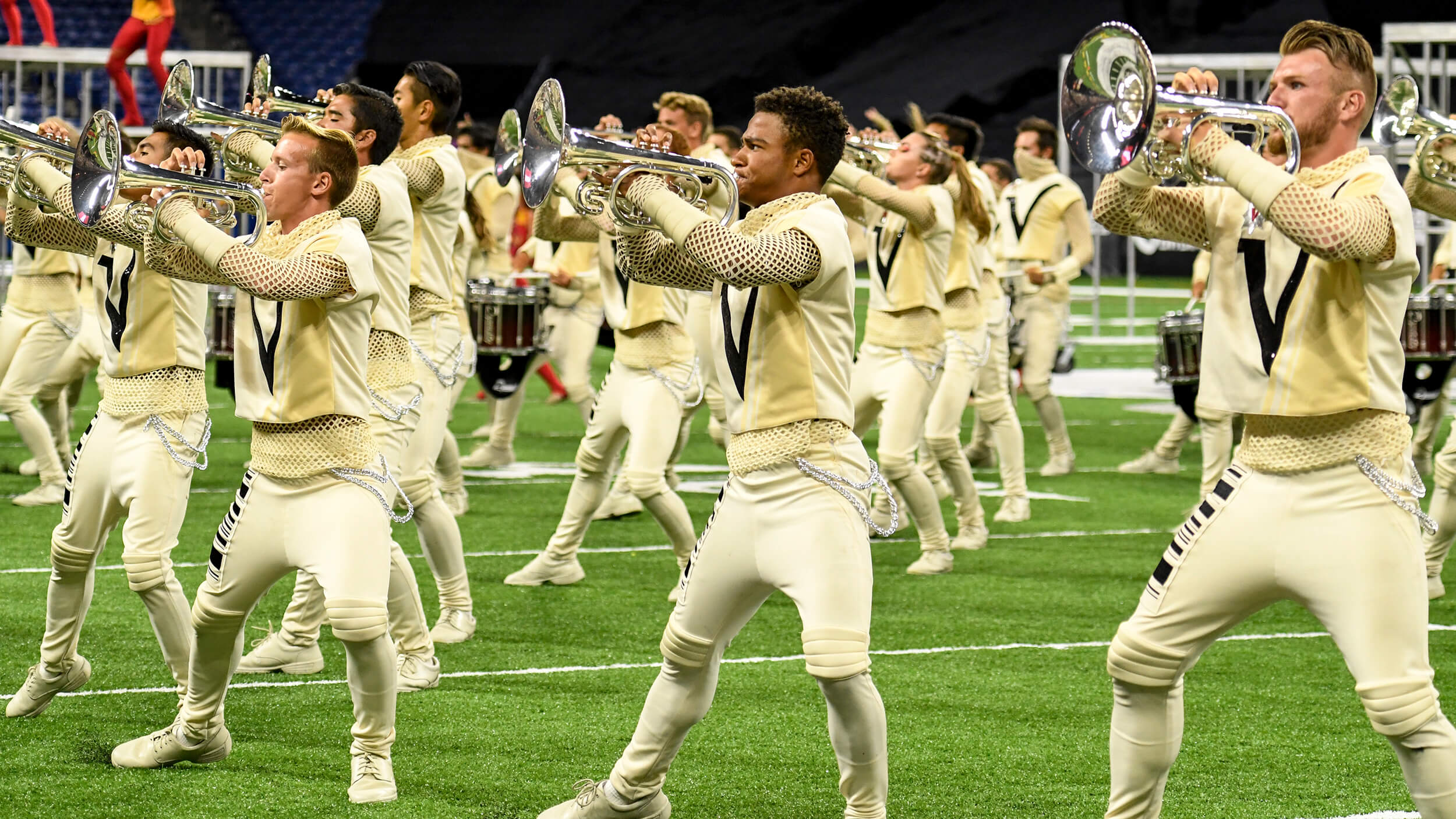 Capturing the Ott Award contributed to Santa Clara Vanguard winning its first DCI title since 1999. Especially memorable were horns creating Doppler effects as players spun around on rotating platforms. The last massive chords of the show were possibly the loudest ever delivered by the California corps. 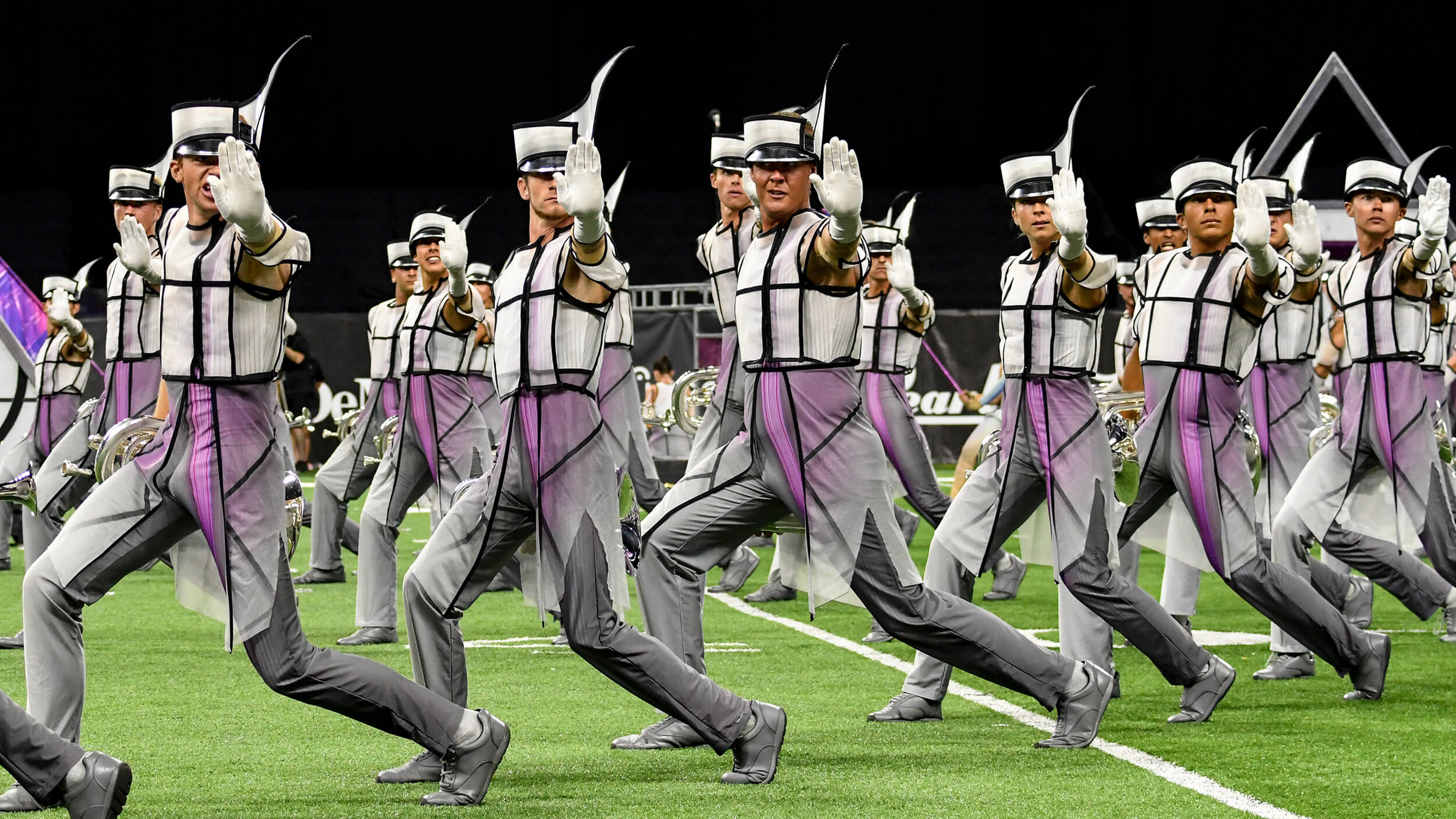 As in 2011, Crown’s brass line won the Ott Award despite placing fourth in Finals. Two heavily rhythmic Bulgarian works were offset by the heart-wrenching poignancy of “Gabriel’s Oboe,” the brass line scoring 0.45, 0.15, and 0.60 points over the lines of the three corps that placed higher in Finals.

Watch Carolina Crown's "Beneath the Surface"

Known for instructing some of the most memorable horn lines of the 1970s, Jim Ott was an arranger and instructor for the Stockton Commodores, Blue Devils and Spirit of Atlanta. Tragically killed in a vehicle accident during the 1980 DCI Tour, Ott's mighty influence continues to echo through drum corps stadiums decades after his premature passing.