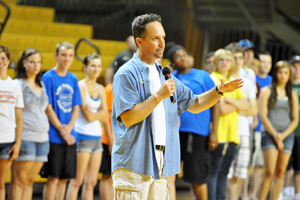 Motivational speaker Fran Kick
Drum Corps International kicked off its 2012 series of leadership workshops last Saturday in Kalamazoo, Mich., to an enthusiastic crowd of about 200 students, parents and educators. Offered as a free add-on to groups that purchase qualifying ticket plans to select 2012 DCI Tour events, Kick Start Your Fall Marching Band Season programs, led by motivational speaker Fran Kick, are designed to show students how to become effective at both leading and following direction. "I'm excited to have launched the first Kick Start session with DCI, one of seven events that will happen in conjunction with the 2012 DCI Tour," Kick said. "Our biggest mission is to engage everyone in the marching music activity having them come a little early to the show and experience what we're calling a leadership experience, but in truth is about leadership and followship and the dynamic between the two." He said unlike educational events hosted in previous years on the DCI Tour, where students would primarily watch a corps rehearse at a stadium with some interaction, Kick Start has students interacting and working together to bring leadership lessons to life. "This is not a sit and listen kind of program," Kick said. "Because the truth of the matter is they'll forget most of what I say, but they'll remember what they do a lot longer. And so our goal is to plant this thought that leadership isn't just about telling your section what to do and when to do it. It's about responding appropriately the rest of your life." 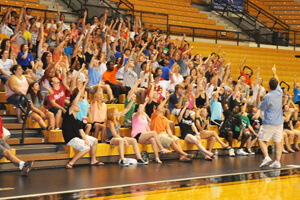 Before he began spending his life on the road speaking with kids from junior high to college, Kick was a director at Centerville High School in Ohio. He first began speaking to groups when he went on leave to work on his master's degree. "A lot of people said [to me], 'You should come speak at our camp,' or, 'You should come speak at our in-service or conference,'" Kick said. "And I never could because I was teaching. So I just told them that year, 'Hey, I can.' And it just snowballed from there." First-year band director Tim Folmar from Manton (Mich.) High School brought a group of about 25 students and parents to the Kick Start event in Kalamazoo, having heard positive reviews about Kick from other educators. "I'm looking forward to see what it has to offer," he said before the session began. "And of course excited for the drum corps show too." Band director Leslie Schwegler from Lincoln High School traveled with her students more than 100 miles from Ypsilanti, Mich. 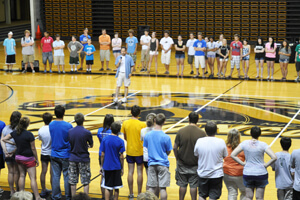 "I thought it was extraordinary for our students to hear such a motivational speaker to get ready for the marching season," Schwegler said. "We actually saw Fran Kick in June at Troy Athens High School." Schwegler said she would absolutely recommend attending a Kick Start event to other directors. One of her students, Sarah Coury, said the event was definitely going to change the way she thinks. This fall she's going to approach problems with more patience than she has before. View a photo gallery from the Kalamazoo Kick Start event. There are six more Kick Start sessions scheduled for the 2012 season. The remaining events will be at: DCI Southwestern Championship Saturday, July 21 San Antonio, TX DCI Dallas Tuesday, July 24 Dallas, TX DCI Arkansas Thursday, July 26 Little Rock, AR The Masters of the Summer Music Games Friday, July 27 Murfreesboro, TN DCI Atlanta Southeastern Championship Saturday, July 28 Atlanta, GA DCI World Championship Finals Saturday, Aug. 11 Indianapolis, IN Learn more about how to attend a Kick Start session.