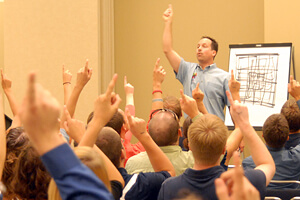 Fran Kick leads a session at the DCI World Championships.
Drum Corps International members are known for turning individual effort into group achievement. And while the fruit of their hard work is evident on the field at every show, DCI's new Kick Start program will offer teachers and students the opportunity to experience their commitment to excellence up close at educational clinics taking place at seven events during the summer of 2012. Offered for free to groups that purchase qualifying ticket plans, Kick Start is designed to show students how to become effective at both leading and following direction—and know when to do each. It's all presented with the goal of firing up students to make their own commitment to excellence while gearing up for marching band rehearsals and performances at their own schools in the fall. "Too often, it's only a small group of students who end up going to leadership programs," says program head Fran Kick, who's been a motivational speaker and educational consultant since 1986. "These Kick Start sessions strive to do something different: We want to give all music students an opportunity to learn more about what I call the 'followership + leadership' dynamic." Each session will provide a learning lab and case-study example for students, staff, and parents. "It promises to be fast-paced and hands-on—learning by doing and not just sitting, listening, and watching," says Kick, who draws on his own experience as band director at Centerville (Ohio) High School in the 1980s and '90s, as well as more than a decade of working with Bands of America/Music For All. Kick Start sessions will be held in conjunction with the following 2012 DCI Tour events: