A corps that is based in two locales in different climates over the winter (the Kiwanis Kavaliers rehearse in both Babson Park, Fla., at Webber University, and in Kitchener-Waterloo, Ontario, Canada) is bound to run into some unique geographical situations. 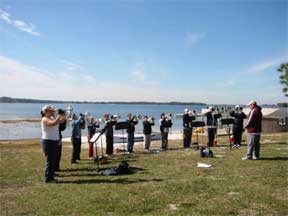 The Kiwanis Kavaliers rehearse lakeside in Babson Park, Fla.
This past January at their Florida rehearsal site, while the Kiwanis Kavaliers members rehearsed onfield under the tutelage of its visual staff, the brass and percussion staff members were locked in a "very focused" meeting, according to corps director Doug Darwin, who at the time was talking on the phone to Jason Logue, the corps' brass arranger, who was at home in Toronto, stranded on the frozen tundra. "Jason had just completed shoveling his driveway for the first time that day and was relishing the thought of doing it again in a couple of hours," Darwin said, trying to downplay the 80-degree temperatures and Florida sunshine that he and the other Kavaliers were enjoying. In the midst of his conversation with Logue, Darwin had to stifle a laugh on the phone as he watched his "very focused" brass and visual staff calmly and quietly move its meeting to a poolside locale. "We might not win in August but we win every camp in Florida," Darwin said. Beyond staff meeting relocations, Darwin said that the winter camps in Florida were successful. "Running monthly camps in Florida has been a challenge, but they have all been rewarding. There's nothing like doing ensemble outside in December (something unheard of here in Kitchener)," Darwin said. "All things are going well. It's been an interesting year for me and the Kavaliers," Darwin said, noting that only 15 percent of the 2002 Kavaliers are returning to the fold this year. "I really thought that we would keep a substantial number of kids from last year since they all reported to have great season," Darwin said. "Most of the kids from last year aren't marching anywhere else, they just have other priorities this year. I am used to having kids stay for years," Darwin said. Despite the low percentage of returning members, Darwin is pleased with the corps' progress. "The show is musically complete and we are into two-thirds of the visual program. We still are looking for a few brass and a couple of guard, but I am happy with the quality of the kids," Darwin said. Darwin said the few Kiwanis veterans are true leaders. "Our leaders are real leaders. An example of this is Chris Hastings, (our number one drum major this year). I offered Chris the spot without an audition this year. Chris was the drum line section leader his first year in the corps as a rookie (1998). He traveled from Alberta for every camp that year. The next year his family moved to Halifax and he couldn't attend every camp, so he gave the spot to another member -- and he continued to provide leadership through example as he continued on as a snare drummer," Darwin said. The Kiwanis Kavaliers are also enjoying the benefits of having a talented staff. "Dennis Laorenza is the staff coordinator and, along with Jeff Bridges, they keep the corps in good spirits and are always amusing," Darwin said. "We have a great educational staff. Our members tend to be young and inexperienced for the most part. Our staff needs to teach and educate at all levels. We don't have an audition process, a monthly update process. Members are expected to develop their skills with the information provided by the staff. I have seen several members move from one section to another over the years without missing a beat." Darwin said that the corps' accessible repertoire (they're doing an all Lennon-McCartney show this year) will be pleasing to all drum corps fans. "The Beatles, who doesn't know this music? We hope to have them singing our show going out the gates," Darwin said.