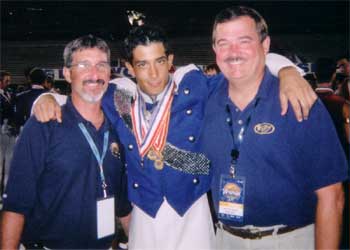 Mark Fosdick sent in this one. "This is a picture of me, Bluecoats director Bill Hamilton and program coordinator Larry Hershman. This was at finals retreat this year (and this was my age-out year). I joined the Bluecoats in 2000 as a contra player. "In 1999 the Bluecoats didn't make finals and a lot of people were worried about the up-and-coming year. But with the fantastic leadership of Bill and Larry and a lot of hard work by too many people to name, we made finals and have pushed the Bluecoats to where we are today. I have to thank these two guys for my four years at the Bluecoats." Thanks Mark!
E-mail your Forzato submissions -- and we will get to them all, in time -- to dave@dci.org along with where and when the photo was taken. Send some biographical information about yourself as well. We'll give you full credit. Also, let us know if you want your e-mail address included, to get feedback from other drum corps fans.