Patricia Archibald sent this picture in. 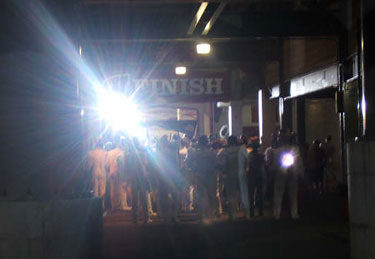 My name is Patricia Archibald, and I haven't marched in a drum corps yet, but I am in my fourth year playing tenor drums in a marching band in Calgary, Alb., Canada.

This is a picture that I took of Phantom Regiment before their Semifinals performance at the 2006 DCI World Championships this past summer. I love the "light at the end of the tunnel" look.

There were about 20 of us that spent about three days driving from Calgary to Madison to watch the World Championships. There was a group of people from the small marching community in Calgary who were marching as members of the Cavaliers, Blue Devils and Santa Clara Vanguard this year. It was great to see them represent! Of course we'll be making the trek to Pasadena in 2007 for Finals again.