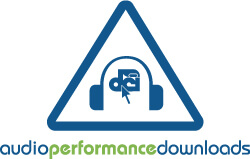 Your favorite corps performances from the 2010 Drum Corps International World Championships are now available as Audio Performance Downloads (APD) from the DCI Fan Network! Rock out to the sweet sounds of the summer on your computer, iPod or other portable audio device with these MP3 files recorded live at the Open Class Quarterfinals on Aug. 10 in Michigan City, Ind. and Aug. 12 during the World Class Quarterfinals at Lucas Oil Stadium.

Listen to this sample clip of the Blue Stars' production "Houdini":

You can buy individual tracks of each corps, or buy each event as a bundle to save more than half the cost of purchasing separately. And don't forget that APDs from eight other 2010 events also are available on the Fan Network giving you an audio time line of corps performances as groups changed and improved their productions all summer long.

Looking for corps performances on CD? All 23 World Class corps will also be featured as part of the 2010 World Championship CD set, now available for pre-order online.

Check it out at store.DCI.org.