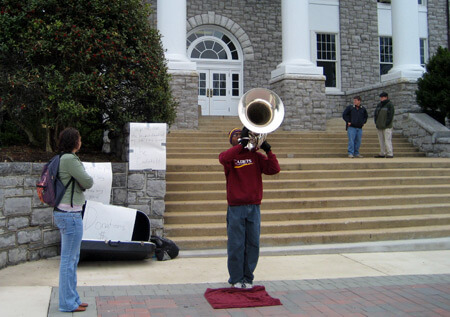 This is a picture of my roommate from James Madison University in Virginia. His name is Keyo Wilson. It has been his dream to march as a member of the Cadets since before I meet him three years ago. The other night was his first show as a Cadet.

Back in April he gave a "concert on the quad" standing in front of Wilson Hall and playing his contra as a fundraiser to earn the money for his tour dues with the Cadets.

It was a very cold day and he stood out there for five hours serenading everyone with his tuba. He played parts from the Cadets' show, the JMU Fight Song, and "Happy Birthday" as hundreds of students, professors and tour groups walked by.

He ended up raising more than $200 in donations at that time, and because of his creative and determined attitude he is now happily living his dream.