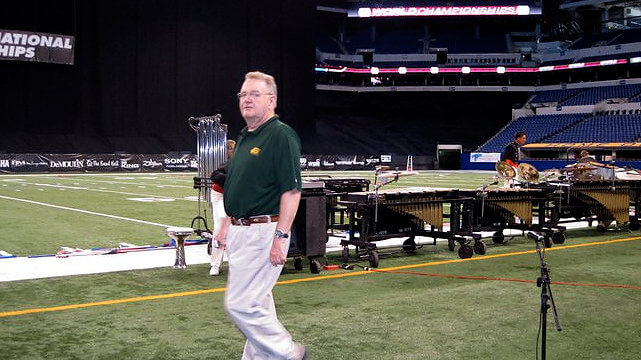 Ed Warren on the field of Lucas Oil Stadium during the 2011 DCI World Championships in Indianapolis.Photo by: Drum Corps International

The Drum Corps International community is saddened by the sudden passing of longtime DCI judge Ed Warren, who passed away Monday at the age of 58.

Warren first judged visual captions during the 1992 DCI World Championships and has been among the most active judges of major DCI events ever since.

In addition to being a sales representative for Quinlan and Fabish Music Company, he was the judging coordinator for Michigan Competing Band Association since 1996 and served as the program coordinator and drill designer for the Kilties all-age corps.

Warren was one of those rare souls who generated positive thoughts from everyone. Fellow DCI judges were deeply hit by news of his passing. Wayne Dillon remembers Warren as being a “gentle kindhearted person.”

Michael Gray knew him as “a one of a kind, quiet and unassuming … but with a razor sharp and incredibly funny wit bubbling just below the surface.” Debbie Torchia remembers his “quirky sense of humor” and his eagerness “to help out in any circumstance.”

Tim Ochran relates how those involved within the drum corps community talk about it “as if it is a place we frequent, a place that has lost one of its 'gentle souls.' It was a place, according to Ochran, where Warren caused others to reflect on how they viewed life as well as drum corps, during parking lot and bus conversations that had the ability to be “life-changing.”

John Turner first ran into Warren on the other side of his judging commentary, remembering him to be genuinely happy to see the corps and color guards he judged and staffs he worked with, being “thoughtful and supportive in his commentary and in critique,” always being “a friendly face, sometimes when we needed it most.” “He really ‘got it’ and was honest and frank while still being supportive,” Turner said.

When Turner became DCI’s Division II & III (now Open Class) judge administrator, Warren would inquire on how things were going and offer any assistance he could provide. Turner adds, “I can’t recall a time when I was around Ed that I wasn’t smiling, if not outright laughing and enjoying the time spent. I am thankful for those times as I reflected on them after hearing of his passing.”

A gathering in memory of Warren for family and friends will take place Sunday, May 17, at Borek Jennings - Braun Chapel in Brooklyn, Michigan. A service is scheduled for Monday, May 18, at St. Rita's Catholic Church in Clark Lake, Michigan.

A fund in memory of Warren has been set up to provide scholarships to students who would be unable to participate in the marching arts otherwise.