Name, hometown: Debbie Krebs, Billerica, Massachusetts Which corps do you volunteer with, how did you get started and how long have you been at it? I volunteer with the Madison Scouts as their head cook. How did I get started: how much space do you have? I experienced my first drum corps show during my teenage years and was instantly hooked! After getting married and moving to Massachusetts, I met another drum corps fan so we attended as many shows as possible in the Boston area. I infected my husband and our son with a love of drum corps and there was never a doubt regarding my favorite corps: Madison Scouts. 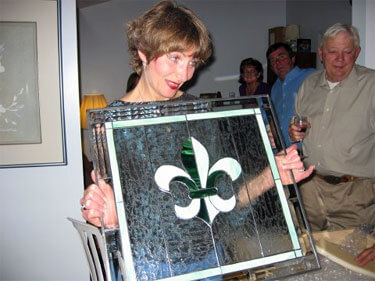 Debbie Krebs with a 50th birthday from husband, son and best friends.
One day my son, Nick, announced that when he would join a drum corps his dad could drive and I could cook. Humm, I thought, let's tuck that plan away for a few years! In January, 2003, I very unexpectedly lost my job. I started thinking about what opportunities I had to spend time with Nick during the summer doing something we would enjoy. The list was small: 1. Volunteer with Madison, 2. Volunteer with Madison, 3. Be home in July for Boy Scout camp, 4. Volunteer for Madison. The rest is history. Nick and I went on the road in 2003 for about four and a half weeks. After I processed my adventure, I wrote to corps director Sal Salas offering to take over the food program for the Scouts and since 2004 I have been the head cook. I told Sal I plan to stay until I cannot, on my own, get into and out of our cook truck. By the way, I have a new job where I take a leave of absence during the summer to go on the road. What kind of work do you do with the corps? As the head cook, I solicit and schedule all volunteers for camps and summer tour. I negotiate with Sysco for our summer food drops. I prepare all menus. I actively work with my volunteers preparing all meals for the corps. I travel to Madison to cook for the corps during winter rehearsal camp, and I go on the road for the entire summer season. My volunteer job has grown to a year round position!
What is your favorite part of being a volunteer? Being thanked for a great meal! Holding dear the new friends I have made through this adventure. What is the most difficult part of being a volunteer? Sleep deprevation! Do you have any favorite memories or anecdotes from your years as a volunteer? Before serving the last meal during the Tour of Champions in 2004, I was called out of the truck and the corps sang "Never Walk" to all volunteers. Every time I replay this moment I get goose bumps and teary eyed! Water gushing from the back of the truck when a pipe was cut to see if a water tank was full of water! What are you most looking forward to during the 2006 season? Meeting and welcoming the new members and reuniting with my friends from previous tours. Finals in Madison! What advice do you have for those who would like to get involved as a volunteer with a corps? Do it! Do it NOW! Call and sign up! You will never regret the time spent working with a corps. The memories you will make that are yours for the rest of your life. Add anything else you'd like. The hard work, the lack of sleep, the volunteers work with the corps for the marching members. It is thrilling to watch the corps come together during the season. Every corps has its attachments, but at the Scouts, the young men truly enjoy the brotherhood. I am truly blessed that my family understands how important this mission is to me, that they enthusiastically support me in this adventure. I guess I should not complain if the house is a little unkempt when I arrive home from camp or the summer! Name, hometown: Scott Arthofer, Dubuque, Iowa
Brian Jones, Biggsville, Ill. Which corps do you volunteer with, how did you get started and how long have you been at it? Madison Scouts since 2003. A good friend of ours Chuck Cournoyer got us involved with the Scouts. We had been involved in drum corps for several years before that.

What kind of work do you do with the corps? Cook crew, work for the Drums on Parade event and of course other duties as assigned! 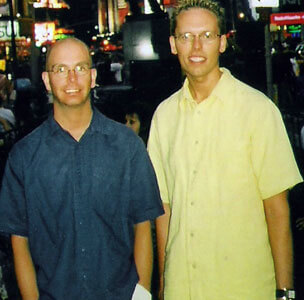 Scott Arthofer and Brian Jones
What is your favorite part of being a volunteer? Meeting new people and making lifelong friends. What is the most difficult part of being a volunteer? Sometimes you don't always have the best working conditions or enough sleep. Do you have any favorite memories or anecdotes from your years as a volunteer? In 2004 at one of the winter camps we all sat around telling stories and laughed until our faces hurt. Sal Salas and Michael Cesario always have great stories to tell. What are you most looking forward to during the 2006 season? Finals being back in Madison! What advice do you have for those who would like to get involved as a volunteer with a corps? It is certainly an experience you will love. Drum corps people share a bond that will last a lifetime.