The Sponsors of Musical Enrichment, Inc. (S.O.M.E.), sponsor the annual Jim Ott Scholarship, named after the legendary drum corps brass arranger and instructor. The $3,000 scholarship is awarded to a current drum corps member who is pursuing higher education in the music field and who demonstrates leadership qualities. 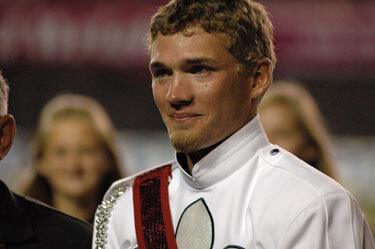 Steven W. Ehrhardt II
The 2006 winner of the Jim Ott Scholarship is Steven W. Ehrhardt II, a third-year member of the Madison Scouts. The 19-year-old sophomore music education major at the University of Wisconsin-Lacrosse feels that being a part of drum corps has helped him be successful in his music education studies. "Drum corps put me ahead of everyone else because I had experience playing with musicians who are more advanced than me," said Ehrhardt, who also marched two years in Capital Sound. "By being around guys who are better than me, it helps me get better. I'd been planning to study music before I started marching corps, but corps has definitely helped me along the way." The award is credited directly to Ehrhardt's tuition at UW-Lacrosse, so it will help him pay off his school expenses. "It's amazing to get a scholarship named after Jim Ott, because he was such a highly respected guy," he says. The Fort Atkinson, Wis., native hopes to be a band director some day.