From a Madison Scouts press release: The Madison Scouts have announced that Alex Houston will serve as the corps' 2007 drum major. Houston, 19, is currently a freshman at Indiana University pursuing degrees in French horn performance and music composition. A native of Princeton, Ind., he attended Princeton Community High School where he was a member of the marching band program and also served as the drum major his senior year. 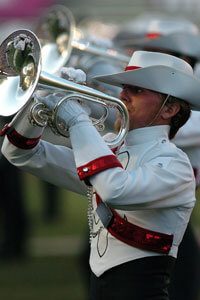 Alex Houston
Throughout high school, he performed with the Evansville Philharmonic Youth Orchestra as principle horn and also earned a position in the Indiana All-State Orchestra. After seeing his first drum corps show in 2001, Houston became interested in pursuing music and decided to work toward marching as a member of the Madison Scouts. He is starting his fourth year as a member of the corps, and was the mellophone section leader in 2006. He will age out after the 2009 season after six years with the Madison Scouts. Houston said: "I look forward to the challenge of serving as drum major for the Madison Scouts and applying the leadership skills I have learned. I understand the importance of the position and will strive to build upon the rich history and tradition of the drum majors who had this honor before me." www.madisonscouts.org