Jimmy Oliver a former member of the Magic, sent this photo. 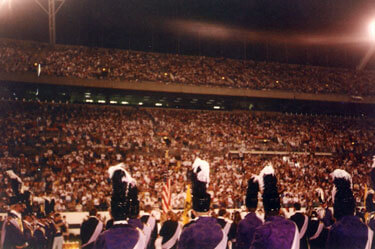 This is a picture of the crowd in the Citrus Bowl at the DCI World Championship Finals in 1997 from the back of the Magic of Orlando block just prior to scores being announced. 1997 was my age-out year. I spent four years marching as a contra player with Magic. It was nice to age out at home (only a two-and-a-half hour drive to my own bed), but the heat and weather that week was as forgettable as our three weeks of every day rehearsals in June.