From a Magic of Orlando press release: As the worldwide popularity of drum corps continues to grow, it's no surprise that more and more international members are joining the ranks of many of our top corps. Magic of Orlando is one such corps, welcoming four members from Japan this season. 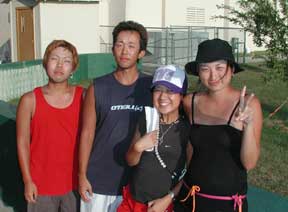 From left to right: Naoya Ishihara (trumpet), Motoi Takeuchi (mellophone), Yukiko Watanabe (trumpet), Mayumi Takabayashi (mellophone)
Japan is now home to several very good drum and bugle corps. Regardless, many Japanese still endure the expense and separation from family to march with an American corps. But, why? One possible reason could be that in spite of how good the Japanese corps are, none have emerged of the same caliber as the American Division I corps. And no matter how closely the Japanese corps emulate their American counterparts, there's just nothing quite like the "original." For diehard devotees of the activity, the experience of performing in an American corps is the drum and bugle corps equivalent of a pilgrimage to Mecca. Mayumi Takabayashi, of Magic's mellophone line, is a part-time waitress in Fujisawa, Japan, and offers her insight as to how the Japanese and American corps differ, "Japanese drum and bugle corps and marching bands are all indoors." She goes on to explain that because Japan is so densely populated, there just isn't an abundance of outdoor venues or athletic facilities like we have here in the United States. So, what is it about Magic of Orlando that enticed these four very talented Japanese musicians to travel from the Far East to the Deep South, enduring Amazon-like heat and humidity? The four are unanimous in their answer: it's the energy and intensity of Magic's program. Yukiko Watanabe, trumpet, is from Kyoto and marched with Yamato last season. She explains her motivation for joining Magic, "Last year, I saw Magic of Orlando's show. It was [an] exciting show, so I wanted to be [a] member of Magic of Orlando." Incidentally, Yukiko may easily be Magic's smallest corps member. But don't be fooled by her diminutive size -- she's marching proof the adage, "good things come in small packages." She's a powerhouse in the trumpet section and a dynamo on the field. Even with her shorter-than-average stride, she has no trouble keeping pace with the frenzied tempo of Magic's "Silver Voices" program. A university student from Kawasaki, Japan, Motoi Takeuchi, mellophone, adds that he was drawn to Magic because of the staff, specifically the brass caption head, Gino Cipriani. "Gino is very famous in Japan," says Motoi, "he is [a] great teacher." Naoya Ishihara, trumpet, is a civil servant, a kind of traffic control officer. His decision to perform with Magic was clear and simple, "I played last year in Magic!" he proclaims, beaming very proudly. For the four, membership in Magic presents unique challenges: most notably, the distance from home and long separation from family. Each admits that they couldn't do it without the support of loved ones back home. "My family approves of Magic because it's a very good experience," says Motoi. Similarly, Yukiko says, "My mother [agrees] this is [a] great experience." Then she admits, "I miss home a little bit." But homesickness isn't a problem says Mayumi, "The other members [of the corps] make [us] feel welcome -- like family."