On Wednesday, Aug. 8, the world's best competitive eaters will converge on Knott's Berry Farm, America's first theme park, to compete in the first-ever Drum Corps International Peanut Butter & Jelly Eating Championship. Among the eaters vying for the cash prizes and bragging rights will be Joey Chestnut, the #1-ranked competitive eater in the world and a former trumpeter. The PB&J Fest was created to celebrate the start of the 2007 Drum Corps International World Championships at the Rose Bowl Stadium in Pasadena, Calif., which will take place from Aug. 9 through Aug. 11. "Drum Corps International is celebrating its 35th anniversary, and its first-ever West Coast World Championship event," said Lora Morton, manager of promotions services for Drum Corps International. "We were looking for a great way to kick off a week of fun and competitive excitement in Southern California, and we think that the PB&J contest will be a blast!" The contest will feature not merely an all-star cast of competitive eaters, but a virtual cornucopia of interesting characters to boot. The favorite is Joey "Jaws" Chestnut, who achieved near-celebrity status and a #1 Major League Eating (MLE) world ranking when he defeated legendary competitive eater Takeru Kobayashi by downing 66 hot dogs at the Nathan's Famous 4th of July Hot Dog Eating Contest. Chestnut is a former marching band trumpeter, and his brother Paul was formerly a member of the elite Blue Devils, one of the top contenders for a championship title at the Rose Bowl Stadium this year. Some have even contended that Chestnut's "chipmunking" abilities as a competitive eater stem in part from his cheek workouts as a trumpet player. 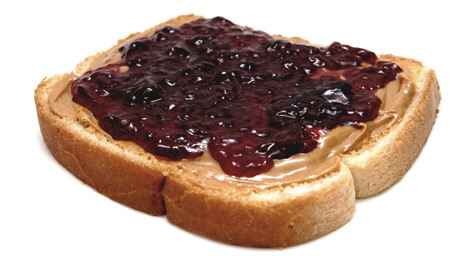 Major Leauge Eating rules call for a 2 to 1 jelly to peanut butter ratio on its regulation sandwiches.
"Joey Chestnut's mom used to remove the crusts, but that's not allowed in Major League Eating," said Richard Shea, president of MLE. "Nobody knows what impact this rule will have on the number one ranked eater in the world as he steps up to the plate at Knott's Berry Farm." Peanut butter and jelly sandwiches are a common staple of the drum corps diet, mass-produced by the hundreds and eaten together so frequently that they have become a symbol of team solidarity. Over the course of a typical season, top Drum Corps International units will feed their combined 5,000 performers and staff a whopping 1.2 million meals on the Summer Music Games Tour, including 42,500 loaves of bread, 20,000 lbs. of peanut butter, and 25,000 lbs. of jelly – all washed down with 17,500 gallons of milk.