The Mandarins Music Academy is bringing music education to students all throughout the Sacramento area.

Like any drum corps, Mandarins’ mission statement acts as a guiding light.

The Sacramento-based organizations’ goal is simple, in all of its endeavors — to “transform lives through performing arts."

Many of those lives, of course, have been high school and college students performing and participating in the summer drum corps experience. But nothing says they have to be; Mandarins’ mission, in essence, extends far beyond the tour buses and football fields of the annual Drum Corps International Tour.

As such the Sacramento corps sees its entire community as one that can be served with the life-enriching benefits of music and performance. It’s those values that inspired a recent partnership between the Mandarins Music Academy and the Elk Grove Unified School District (EGUSD) to put band programs into more than 40 elementary schools.

“This is our connection back to the community,” Mandarins executive advisor Jim Tabuchi said. “This is our home base. So, a huge part of it has been to come back and reconnect with our community in a really big way, and also to support music, education, performing arts, and transform lots of lives through this program.”

Mandarins Music Academy has existed since 2016, with the aim of bringing and developing musical skills within the members of the community following the ratification of California’s Proposition 13, which, according to Tabuchi, led to the elimination of a variety of extracurricular programs in California schools.

At its outset, the program was serving just one elementary school with 11 students, but has grown over the years to ultimately reach the point of being able to serve the entirety of EGUSD, the largest school district in northern California.

“It's quite a large scale we're operating at,” said Ryan Lee, assistant program director of the Mandarins Music Academy. “And we're experimenting with a lot of onboarding and recruiting applications coming in. And then, after further training and development, all the classes will take place either right before school in the mornings, or right after school when they get out, so it's outside of school hours.”

Mandarins Music Academy is currently in the process of recruiting and hiring qualified music educators who want to give back to their local community with the gift of music.

With the support of EGUSD and its individual schools, those individuals — referred to as “music directors” and overseen by “music advisors” — will develop band programs within the schools themselves.

Apply to be a music director with the Mandarins Music Academy 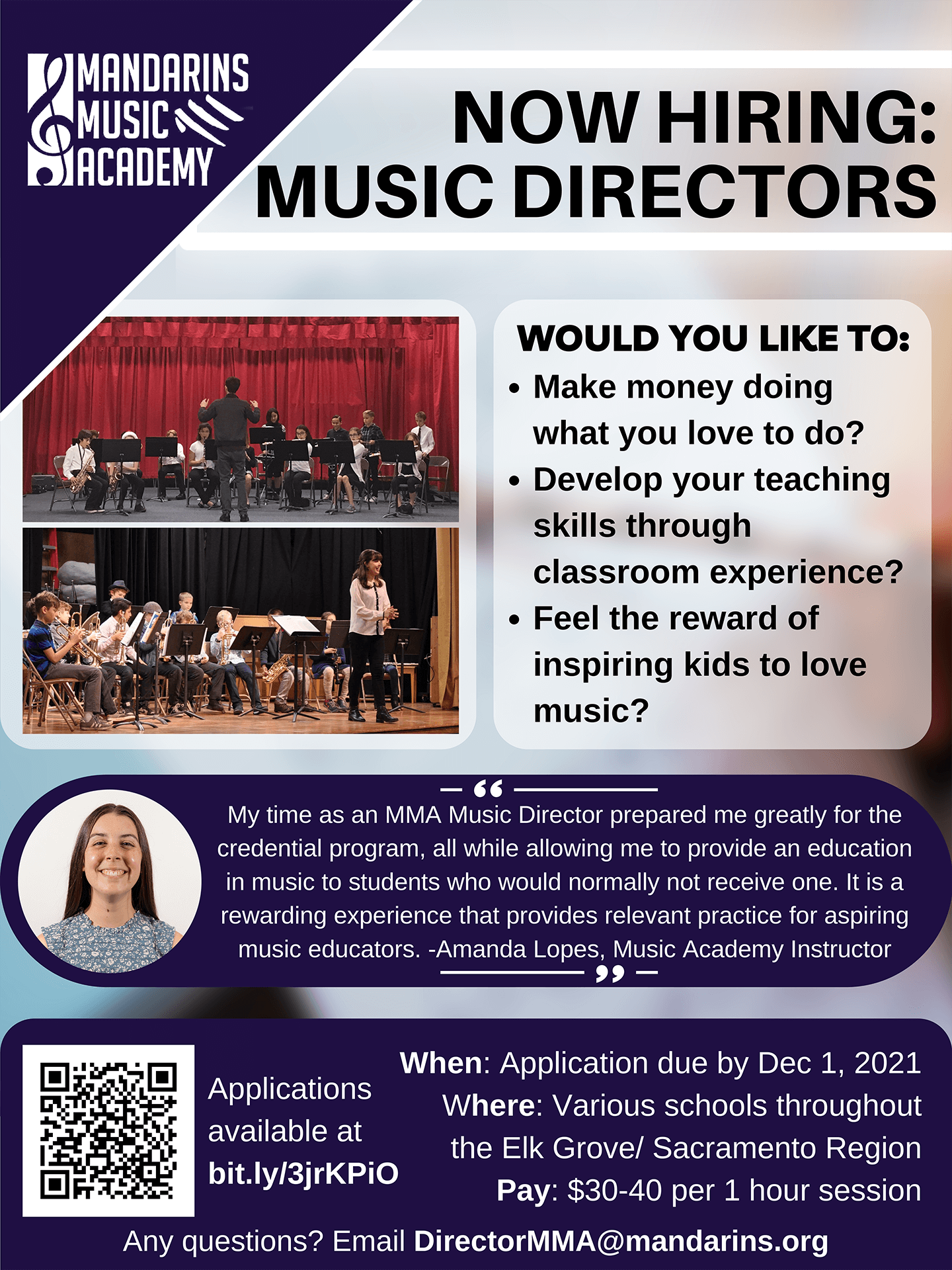 “If you look at teaching at 42 elementary schools, we're likely going to need about 25 or more music directors,” Tabuchi said. “And so right now it's about recruiting and getting them trained up.”

In the past as well, participants in Mandarins Music Academy have had to pay a small fee in order to take part.

Thanks to the program’s partnership with the school district itself — which, according to Tabuchi, features a variety of schools ranging from those in affluent neighborhoods to those with Title 1 distinction — student participation will be largely free of cost.

“Through this partnership with the district, it won't be pay-to-play at all,” he said. “And there will be very minimal — if any at all — cost to the students and the families.”

Due in large part to a strong and longstanding partnership with KHS America — the parent organization of Jupiter, Mapex and Majestic — the Mandarins are also able to supply loaner instruments to the students.

“We just found a real kinship and partnership with KHS,” Tabuchi said. “What we found is, you know, their business is not just about the numbers — and of course, they have to make a great business for themselves, but we really felt that kinship in the heart, which is what we're all about.”

Ultimately, Mandarins partnership with EGUSD wasn’t developed in direct hopes of generating future recruitment or buzz for Mandarins as a performing ensemble; at its core, it’s about supporting music in the community.

But there’s certainly something to be said for the investment to be made in music at the elementary level and its long-term rippling impact on all things music and performance — in the Sacramento community, in the Mandarins, in drum corps and beyond.

And ultimately, knowing that elementary school is where most musicians started their musical “career,” those involved with Mandarins and Mandarins Music Academy are excited to start hundreds of young students on that same life-changing journey.

“Had it not been for elementary music education, I may not have marched in the Mandarins and be where I am now a couple years later,” Lee said. “It all goes back to that music education at the elementary school level. It’s just very inspiring and exciting.”