The Cavaliers have taken the first of three Division I shows at the DCI World Championships in Madison, Wisconsin, but two other corps appear to have not given up their right to lay claim to the big prize on Saturday night. Plus, all throughout the Quarterfinals lineup, there are a number of tight races heading into the rest of the week. Pioneer (23rd place-71.550) was less than seven points from advancing to Semifinals. When you consider that five more corps took up residence in that group that ended their season Thursday night, one can better appreciate the quality of corps this year. Esperanza (22nd-72.800) and Pacific Crest (21st-74.900) pushed The Magic (20th-75.225), Seattle Cascades (19th-75.525) and Southwind (18th-77.950), with Southwind placing 17th across the music captions but falling to Mandarins in most other captions. 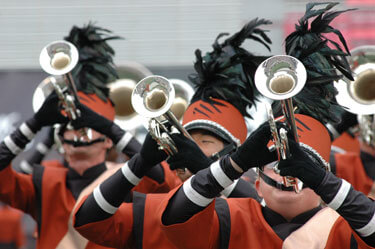 Mandarins made a significant move in the Friday's Quarterfinals competition.
Mandarins (17th-78.375) made it into Semifinals on the basis of a top-17 finish in many captions. A 21st place finish from one music percussion judge was offset by a 17th place finish from another, providing the spread of .425 necessary to advance to Friday's Semifinals. Capital Regiment (16th-81.925) almost nicked Blue Stars (15th-82.225) and Crossmen (14th-82.675) on the basis of a 13th place finish in drums. Colts (13th-84.625) were 13th across the board in the combined captions of general effect, visual and music. Spirit from JSU (12th-86.525) has maintained a healthy spread of almost two points over Colts heading into the all-important cut-off for Saturday's competition. Glassmen (11th-88.125) is shooting to top Madison Scouts (10th-88.250) in one of the many interesting close races that have unexpectedly developed at the end of the season. The two corps have stayed quite close in all captions except percussion, where Scouts have opened up a spread of .95. There is an exciting three-way race going on between Boston Crusaders (9th-89.325), Blue Knights (8th-89.650) and Carolina Crown (7th-89.675), with only .350 separating 9th place from 7th. In Quarterfinals, Boston had the distinct edge in percussion, scoring 18.25 to Blue Knights' 17.80 and Crown's 16.95. Any shift in that caption could spell the difference between 7th and 9th place. Crown actually had the edge in brass and music ensemble, but stumbled due to a 12th place finish in music percussion. Another fascinating race is between Santa Clara Vanguard (6th-92.375) and Bluecoats (5th-92.975), with the Cadets (4th-93.475) a half point above. Santa Clara Vanguard's primary strength was a 4th place finish in visual ensemble, while Bluecoats delivered 4th place in music general effect, music ensemble and a very strong tie for 2nd with Blue Devils in percussion. The Cadets were 4th or 5th in most captions, only placing lower in visual ensemble (6th place). And then a phenomenal race has developed at the top that has added tension and excitement to the competitive proceedings. Phantom Regiment (3rd-96.025) is within .9 of winning the gold medal, largely based on a 1st place finish in percussion (.55 over the Cavaliers and .50 over Blue Devils) and brass (only .1 over the Cavaliers and .3 over Blue Devils). The corps also took 1st place in visual performance by a scant margin. Blue Devils (2nd-96.525) took top honors in visual ensemble (by .1 over the Cavaliers) and color guard by the same small spread. The corps hung tight in all other captions. The Cavaliers (1st-96.900) took 1st place in general effect visual and music, opening up a total general effect spread over Phantom Regiment by .8, but only .2 over Blue Devils. The .55 spread down from Phantom Regiment in percussion might be a deciding factor come Saturday, as well might be that large spread in general effect. But while most the attention appears focused on the Cavaliers being able to stay on top and Phantom being able to make the final jump to record book glory, Blue Devils are poised to nudge their way to victory as well. As mentioned earlier, we have never seen this many tight races up and down the competing corps. The shifting of placements throughout the summer and the evident blockage of corps getting very friendly with each other's scores has made this season one to remember for its uncertainty and race to the absolute finish. These tight races will also help create great memories which can be relived on the 2006 DVDs and CDs, which are now available for pre-sales at store.DCI.org.