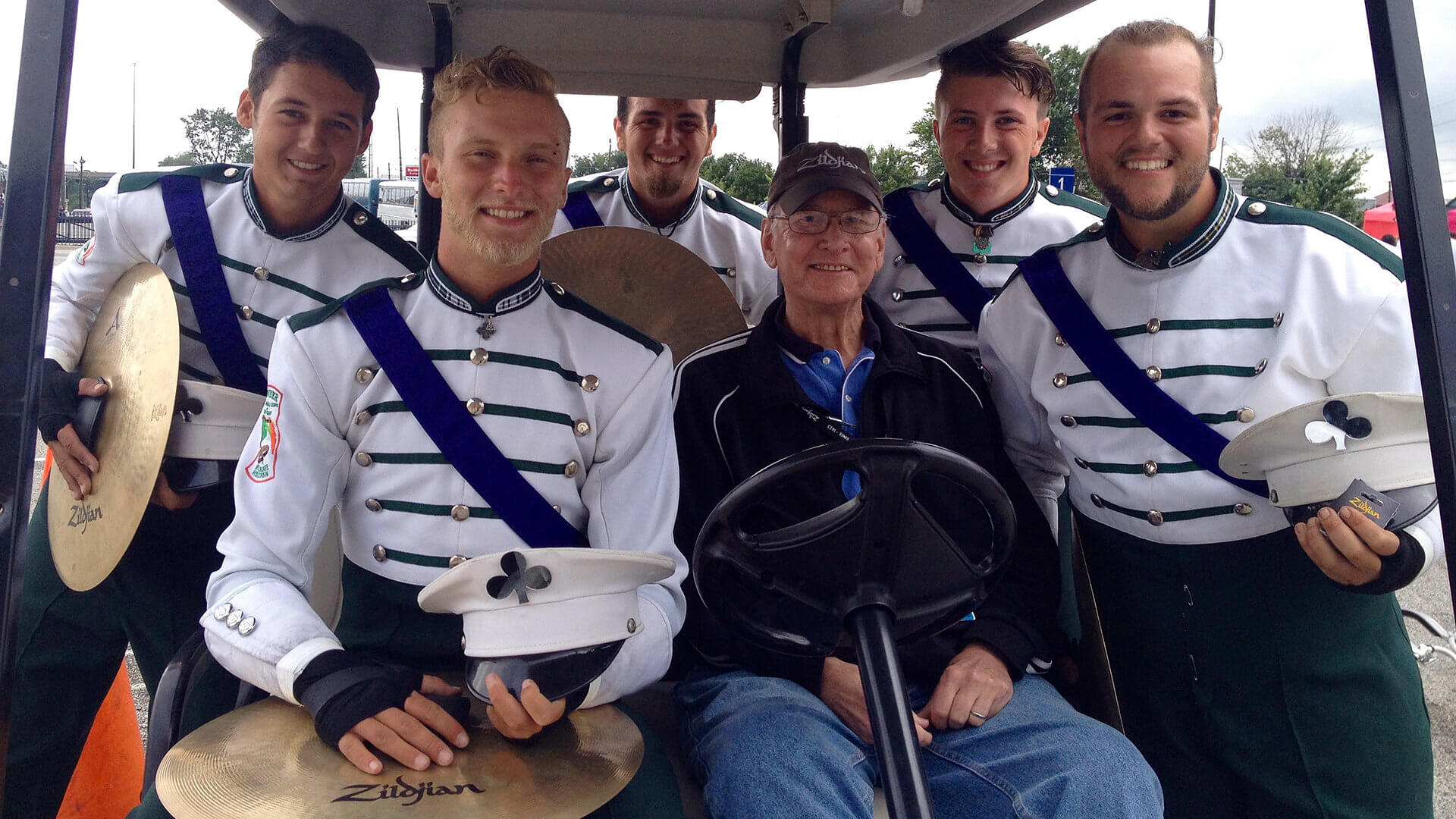 Al Moffatt with members of the Pioneer cymbal line during the 2015 DCI World Championships in Indianapolis.Photo by: Drum Corps International

Drum Corps International is saddened to learn of the death of Al Moffatt, marching manager of the Avedis Zildjian Company for the past 35 years. He passed away on July 15 at the age of 69.

Members of Zildjian cymbal lines were used to seeing Moffatt appear at numerous drum corps rehearsals and at contests, often with new cymbals and gongs to replace damaged or worn out equipment. He knew many of the performers by name. A few years ago, this author visited Moffatt at his home in suburban Philadelphia. He was cataloging a vanload of Zildjian products that he was going to take to numerous corps at the DCI Eastern Classic in Allentown, in order to replace cymbals or gongs that had weathered the challenges of a season of drum corps. Moffatt could be seen throughout the summer in Allentown and other DCI Tour stops zipping around in a golf cart, hunting down the corps to give them the new wares and to collect the old product.

“The DCI and WGI cymbal community is a small but tight knit group of all ages. And with the passing of our friend Al Moffatt, the cymbal world has lost a true friend and pillar of that community,” friend Christina Mavroudis Dempsey said. “I recall vivid memories of Al greeting the cymbal lines after DCI performances at Lucas oil Stadium. There was awe on the part of the performers, and eagerness to be in the presence of such a legend. And Al was always generous with his time during these moments.

“Al represented someone to be admired and certainly emulated when sharing the 'passion of the plates.' He'd watch lines perform their tricks, offer words of advice, or just give a fatherly pat. His smile was always there for these musicians.”

Indeed, it seemed to be impossible to catch Moffatt without a smile on his face. He was doing what he loved, and due to that, his continual interactions with performers and instructors were moments to which he always looked forward to having. It was a joy to watch him at work, because it seemed that he was more at play. His happy demeanor was contagious. Spending time with him made others feel upbeat. He made sure everyone he came in contact with felt that they were special. In doing so, became a proud ambassador of Zildjian and the entire marching music community.

“Al was largely responsible for establishing Zildjian as a major force in this community,” Zildjian CEO Craigie Zildjian said.  “He provided unparalleled support to so many ensembles. His tireless efforts and dedication have provided the guidelines for Zildjian to continue the excellent service, on which the artists and ensembles have come to depend. However, far more than that, he was a friend who we will miss, dearly.”

That sentiment about Moffatt being a friend is one shared by all who knew him. But to members of the marching arts, he was much more than a friend. According to Dennis DeLucia, “Al Moffatt represented the history of the marching activities. His passion for—and contributions to—the worlds of drum corps, indoor drum lines, and bands are significant and timeless.”

Lauren Balsamo Higgins remembers Moffatt handing her a pair of marching cymbals when she was a 14-year-old member of a local marching band. After having problems getting the hang of playing cymbals, Moffatt spent hours with her to teach her the proper technique. He instructed her to “Crash away, but take good care of these plates, for you will never know where they will take you in life.”

Higgins went on to march as a member of the Crossmen from 2001-2002 and spent four years in the Reading Buccaneers all-age drum corps. She says, “If it wasn’t for Al, I wouldn’t have discovered drum corps and learned so many leadership skills, time management skills, work ethic, and a sense of family.”

A viewing will be held Friday, July 22 between 11 a.m. and 1 p.m. at Jarrettown United Methodist Church in Dresher, Pennsylvania, followed by a private burial. On Friday, August 5, the first day of the DCI Eastern Classic in Allentown, a celebration of life service will be held at the same location. (Dresher is about 40 miles south of Allentown.) Visitation will be from 9 a.m. to 11 a.m., immediately followed by a service.

In lieu of flowers, donations in Moffatt’s memory may be made to the United Network for Organ Sharing or Pets for Vets.