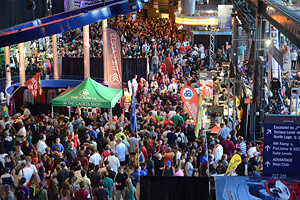 The corps souvenir area at the DCI
World Championships in Indianapolis.
Whether they're driving across the country on a corps' summer tour, organizing uniforms, or selling souvenirs, dedicated volunteers assist Drum Corps International's participating groups in many capacities. Corps come to rely on their volunteers not only for the jobs they do, but also as a constant support system and enthusiastic fan base. Some of the most noticeable volunteers at competitions are the "faces of the corps"—those at the merchandise booths who sell souvenirs to fans while greeting show spectators and engaging with the community. Marching Roundtable, a website encouraging discussion regarding the marching arts, recently released a two-part series focused on educating the public about volunteering for a drum corps. They encourage any drum corps fan—even one with just an hour to spare—to contact his or her favorite corps and see what help is needed. Listen to the first podcast, "Souvies!" at MarchingRoundtable.com. Listen to the second podcast, "More Souvies – The Great Value of Volunteering." On the subject of volunteerism, Drum Corps International recently announced its 2013 Volunteers of the Year, an annual honor that will be presented to three individuals this August at the DCI World Championships in Indianapolis. Read about the 2013 DCI Volunteers of the Year.