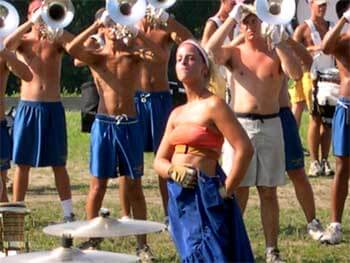 Jenn Browne (lilbrowne23@comcast.net), who marched with the Spartans in 2001 and 2002, submitted this one. "This is a pic of the Cadets at a practice in Chelmsford, Mass., for the Bugler's Holiday in Nashua, N.H., on July 5. The featured guard member in the front is Erika J. (who marched Spartans with me) striking a pose during the dancing in Malague?±a." Thanks Jenn! E-mail your Forzato submissions -- and we will get to them all, in time -- to dave@dci.org along with where and when the photo was taken. Send some biographical information about yourself as well. We'll give you full credit. Also, let us know if you want your e-mail address included, to get feedback from other drum corps fans.