Dawn Strong is a parent of two girls from Reading, MA, near Boston. Both march in the Citations color guard. Both 14-year-old Alyx and 11-year-old Samantha are first-year members of the corps.

"Alex wanted to improve her skills for her high school marching band guard. She asked me to find a camp that she could attend where she would develop better skills. A friend who used to march 27th Lancers until the mid 1970s said, 'Don't waste your money on a three-day camp. If she truly wants to improve her skills, have her join a drum corps.' She further mentioned that there was a corps in Burlington. 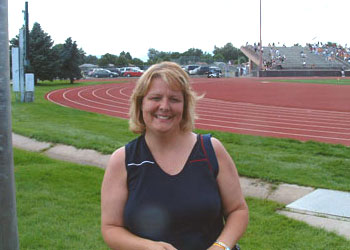 Dawn Strong
"I typed in 'Drum and bugle, Burlington, MA,' and Citations' website popped up. The website said the corps was still looking for guard members and interested kids should stop by during a Saturday practice. At that point, I didn't know I would be dealing with two kids.

"My younger daughter has had an interest in guard, so we took her along and the Citations made us all feel welcomed to the point that my kids went back to their school and recruited four more kids. The parents of those kids keep thanking me for getting their kids involved in drum corps, which is embarrassing because all I did was pass the information along.

"Those parents say they notice the smiles on their kids. None of them, like myself, had any experience in drum corps nor did we know anything about it. All I could keep saying when they asked questions was, 'I don't really know, but why don't you come to a rehearsal?'

"Someone else asked me, 'How can you send your kids away with people you don't know?' It caught me by surprise. It never entered my mind, because I felt that I already knew them and could trust them. From watching the volunteer parents and staff interact with the kids in and out of rehearsal, I could see they knew each kid and they respected each kid, and the kids respected them.

"The kids want to get better, so when an instructor growls at them for something they did or didn't do, the kids take it as constructive criticism and you can see they're going to try to do better next time. The kids don't go whining to their parents. You see the kids rise to the occasion.

"My only complaint about touring is I wish the schools they kids stay at would turn the hot water on. I did the mini tour with the corps, where they shared two shower spigots for the entire corps. I can get a better shower from the produce section at the local supermarket. I've sat in the splash zone of Shamu at SeaWorld and that water was warmer.
"And the sad part about this is I'm hooked on this. I flew into Denver and drove six hours to Kansas to hook up with the corps last Friday. Since then, I've been doing anything I can to help them to do whatever they need done. My sister who lives here in Denver asked, 'Well, do they pay you?' and I responded, 'No, we pay them.' She did not understand that concept.

"It's amazing how these kids hide their aches and pains. They could put a football team to shame with the hours they put in...they don't complain. There is no sitting on the bench with these kids. If they're injured, they won't step down unless someone in authority makes them step down.

"I think this whole activity is phenomenal. It's all about the kids. The people don't just talk the talk, they walk the walk. It doesn't matter if they're rich or poor, popular or not popular, or what kind of clothes they wear. After the first few weeks, they're just part of the family.

"It really is a family. Each kid looks out for another kid. A lot of the age-outs come back to help. How many people would give up two weeks of vacation time to spend it sitting in a bus with all those kids? Most parents won't even ride cross-country with their own kids, much less spending two weeks on vacation with someone else's kids.

"I wish I knew about drum corps when I was a kid."