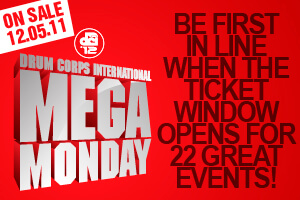 Get your tickets NOW to some of the hottest events of the 2012 Drum Corps International Tour!

The following tickets are now available through the DCI Box Office or Ticketmaster where noted.

Follow the links to each event for ticket prices, seating charts, and ordering information.

Read more about the 2012 DCA World Championships at DCACorps.org.