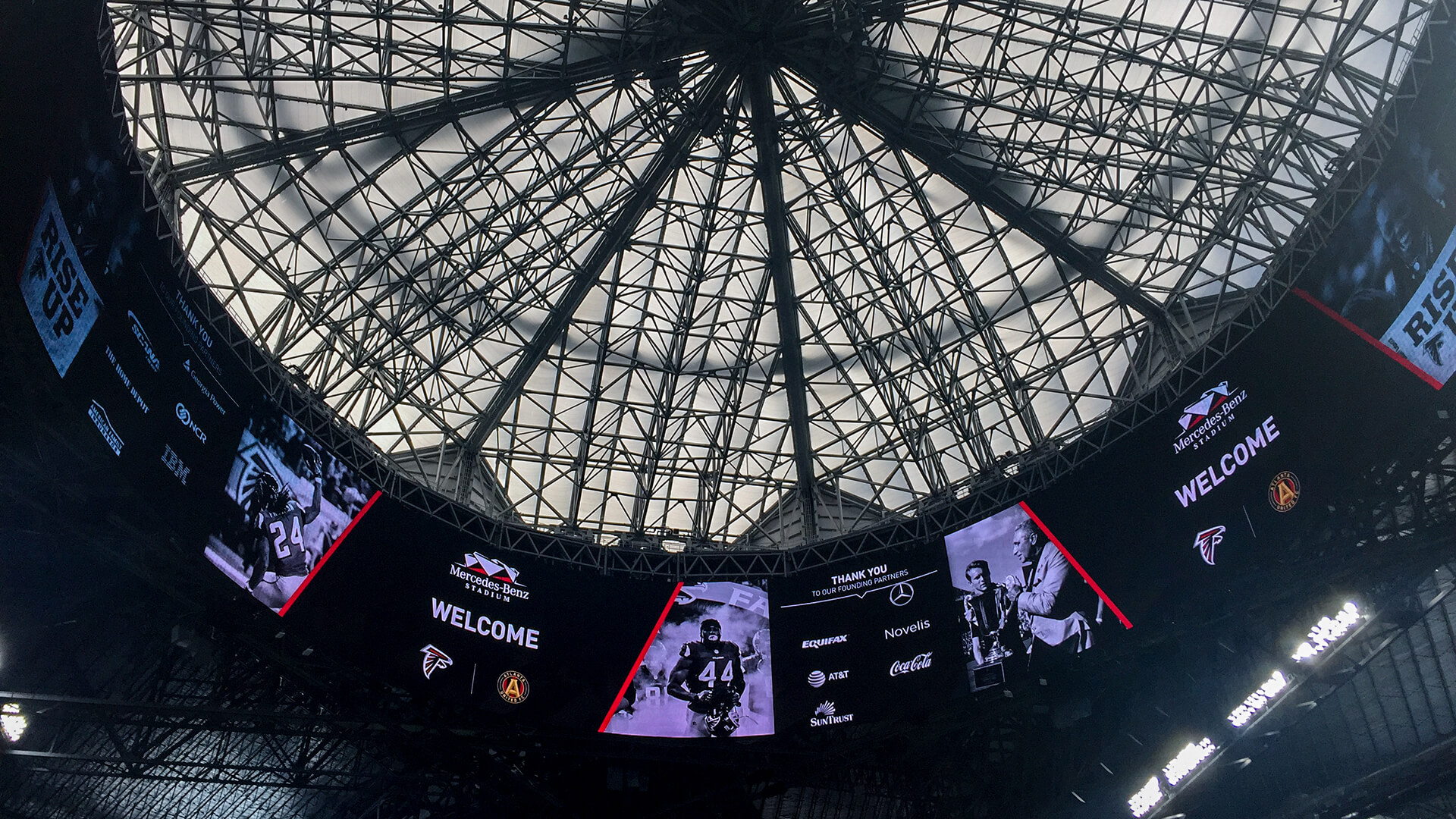 The new Mercedes-Benz Stadium in Atlanta is one of the most technologically advanced sporting venues in the world.Photo by: Drum Corps International

The brand-new Mercedes-Benz Stadium in downtown Atlanta is expected to become the home of the DCI Southeastern Championship beginning with the 2018 Drum Corps International Tour.

The event that will feature the performances of more than two dozen drum corps along with SoundSport and DrumLine Battle teams, is anticipated to take place at the state-of-the-art facility on Saturday, July 28.

The new venue had its first taste of marching music ensembles this past weekend, as 31 marching bands took part in the Bands of America Atlanta Super Regional. Drum Corps International staff members were on hand to observe the event as well as to host meetings with stadium management about the impending DCI Tour event in July. 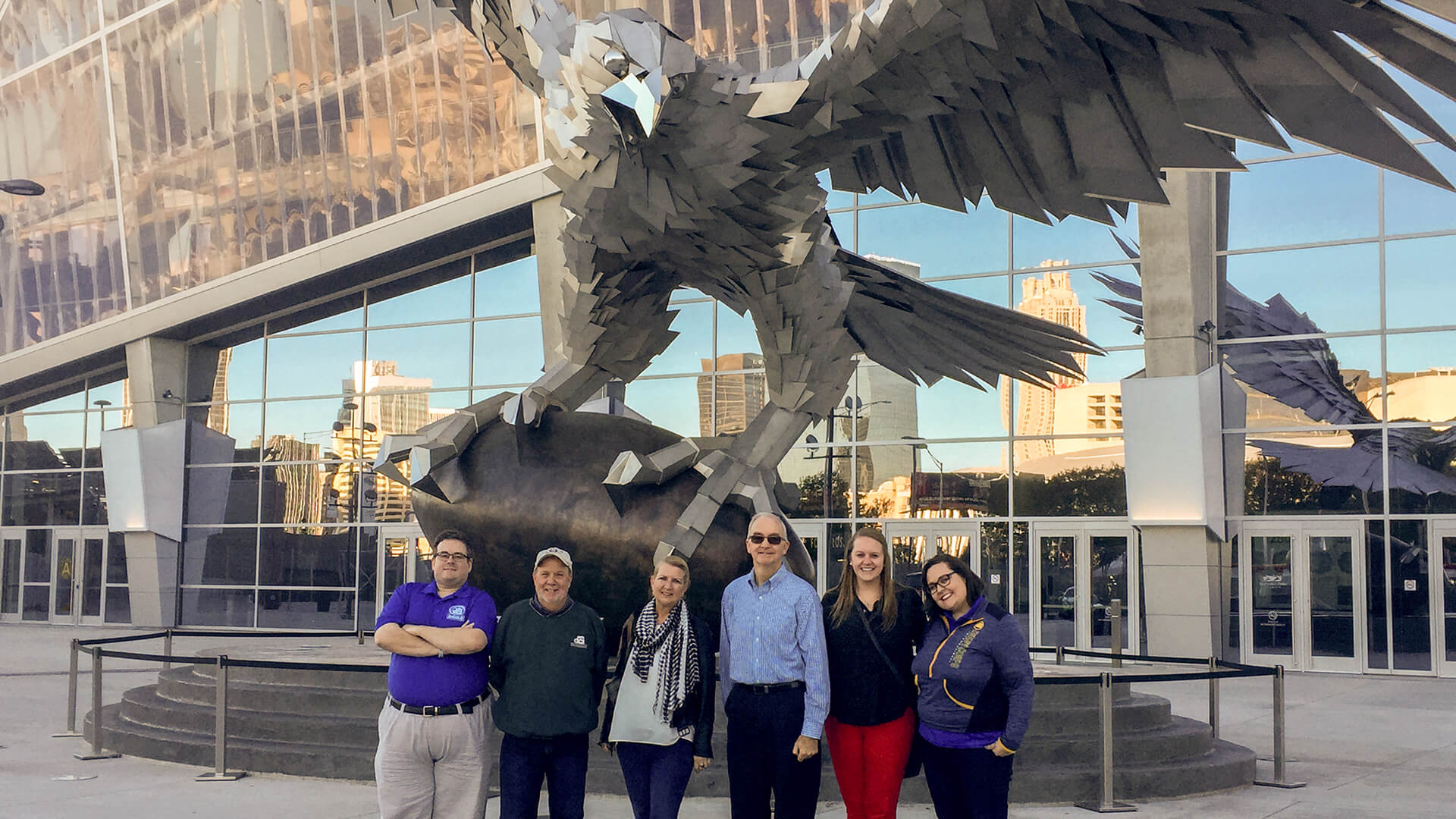 DCI staff members gather outside the venue after a recent tour of Mercedes-Benz Stadium.

Under construction for a number of years and officially opened late in the summer of 2017, the stadium was built in the shadow of the Georgia Dome, which for more than a decade hosted the DCI Southeastern Championship.

“This new facility is one that we're anticipating will offer our drum corps fans and participants an event-day experience unlike anything they may have had outside of the DCI World Championships in Indianapolis,” said Susan Kuehnhold, DCI senior director of event development.

With the spectator experience in mind, Mercedes-Benz Stadium currently boasts the “largest video board in professional sports,” and its unique 360-degree “halo board” circles the domed portion of the facility as a crowning centerpiece. More than 1,800 wireless access points and optimized cell service help to keep fans connected from the moment they arrive at the venue.

The technological achievements of the stadium also extend behind the scenes, with what the stadium calls a “reengineered gate entry experience” that incorporates new turnstiles and entry procedures to allow for 40 percent more capacity than offered at the old Georgia Dome. The facility's benchmark is five minutes or less to get spectators into the stadium.

Also an attraction of the venue's focus on spectators is its “Fan First” pricing scheme for stadium concessions. Designed especially with families in mind to keep every stadium experience affordable whether an NFL game, a soccer match or a concert, a variety of items are available on this special menu from $2 soft drinks in a refillable cup to $5 cheeseburgers.

“We focused from the beginning on building a unique fan experience at Mercedes-Benz Stadium with a goal of helping those who visit to leave the stadium with great memories shared with family and friends, not aggravation and frustration about their experience,” Atlanta Falcons and Atlanta United owner Arthur M. Blank said in a 2016 press conference revealing the unconventional plan for stadium concessions. 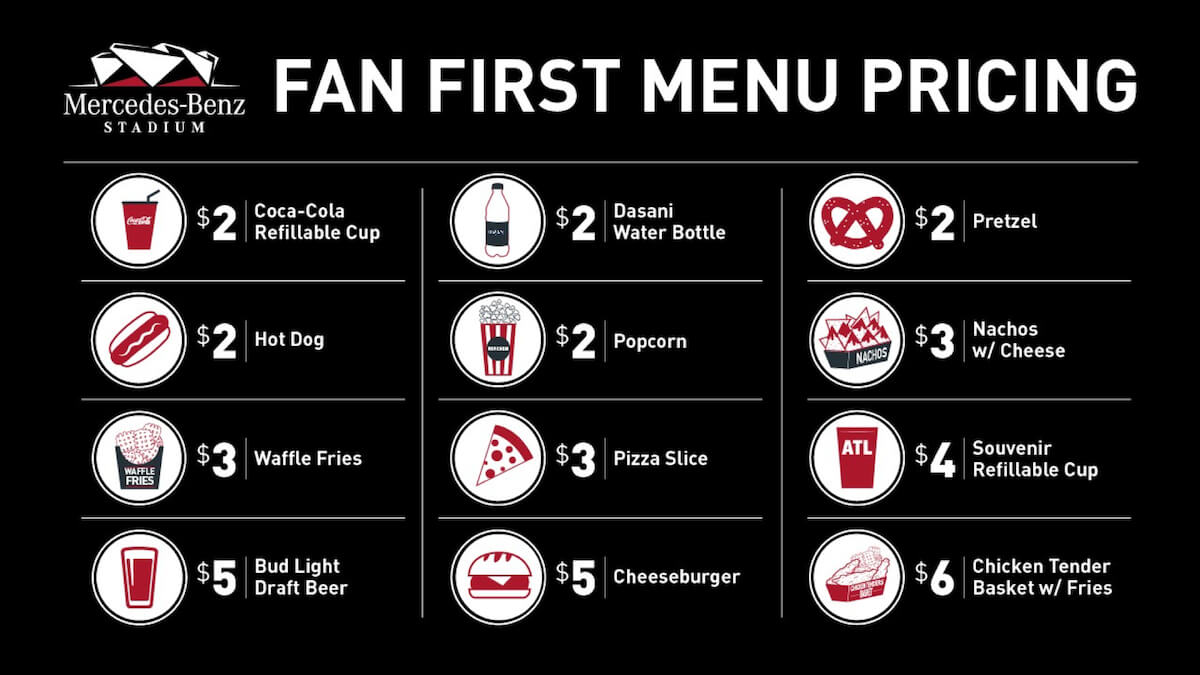 The "Fan First" menu at Mercedes-Benz Stadium offers a wide-variety of options at affordable prices.

With the complete 2018 DCI Tour schedule anticipated to be released at the end of November, tickets to the 2018 DCI Southeastern Championship are expected to go on sale this winter.

Stay on top of the latest updates and information about the 2018 summer season with Drum Corps International's email alerts.