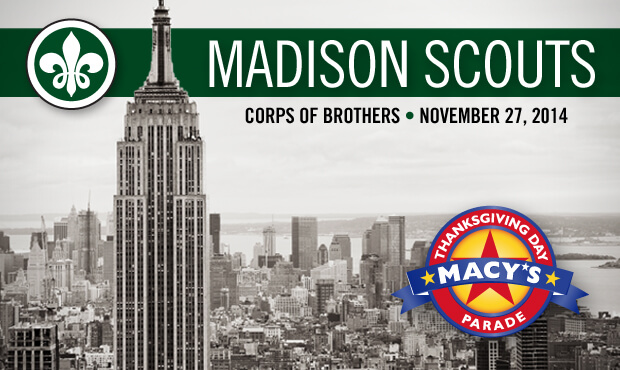 Forget Dasher, Dancer, Donner and Vixen. Comet, Cupid, Donner and Blitzen can take a break too. This year Santa is trading in his trusty pack of reindeer to get behind the reins of a massive Madison Scouts drum corps ensemble 426 members strong. The "Madison Scouts – Corps of Brothers," a group made up of the organization's current and alumni performers—including a whopping 48 tuba players—will soon march down the streets of New York City during the 88th annual Macy's Thanksgiving Day Parade. NBC will broadcast the event nationally the morning of Thursday, November 27, and the Madison Scouts will take a coveted position as the musical group preceding the arrival of Santa Claus, which will mark the parade's ceremonial conclusion. 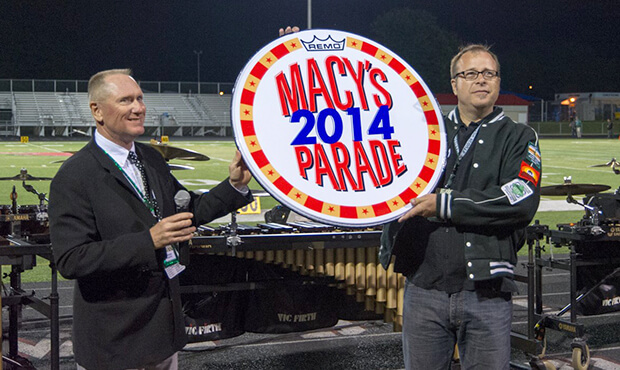 The Madison Scouts learned during the summer of 2013 that they were accepted to perform in the 2014 Macy's Parade.
Assembling this Madison Scouts alumni group has been in the works since 2013, the year of the corps' milestone 75th anniversary. "We wanted to take this opportunity to celebrate the history of the corps by incorporating current members and alumni," Madison Scouts Executive Director Chris Komnick said. "This ensemble has performers as young as 15 and as old as 75, with a performer representing every year of our history from 1956 through 2014." With such a diverse cross section of members past and present able to participate, the organization has been able to assemble a massive group that drum corps fans could only dream about. Eight drum majors, 19 honor guard and banner carriers, 65 percussionists, 91 color guard members and 243 brass players are set to make up this juggernaut of a drum corps. While the group will be recognized on TV hailing from the corps' hometown of Madison, Wisconsin, the performers come from a total of 40 states and six different countries. The Corps of Brothers will be reminiscent of the Madison Scouts Alumni Reunion Project, a group that came together for a one-time gig at the DCI World Championships at the University of Wisconsin in 2006. That group had approximately 240 members total, less than just the brass line of the group headed to New York City next week.

Getting Up to Speed in a Hurry 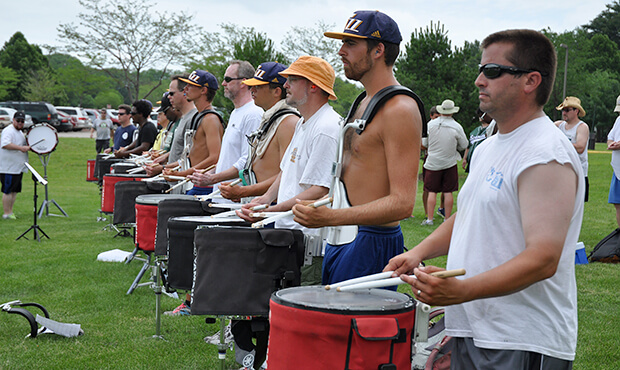 Current and alumni members of the Madison Scouts had the opportunity to rehearse for the parade this past June.
Getting drum corps members who haven't played together since August ready to march and perform in November would be a challenge in and of itself. The Madison Scouts will do that in addition to putting hundreds of alumni members—many who haven't picked up their instruments or marched in a parade in many years—into the mix. To get things started, the corps hosted a rehearsal in Wisconsin in June, where the alumni had a chance to meet and practice with current members of the drum corps. Since it would be months until everyone came together again just days before the Macy's Parade, the group members also learned what would be expected of them to prepare for November. For 71-year-old Tom McInvaille, who was a member of the Madison Junior Scouts and Madison Scouts in the 1950s and 1960s, having the opportunity to play with the current corps members has been a treat. As a reminder of his younger days in the corps, he jokingly calls them the "Skinny Scouts." "They can really play, and the respect they show the alumni is humbling," McInvaille said. "The common drum corps experience makes us all instant friends and brothers for life." McInvaille says that on top of hours of "chopping wood" in the practice room with his soprano bugle, a regimen of competitive squash and running has kept him in shape to ease any worries about marching down the three-mile parade route on Thanksgiving. "I have been doing a lot of walking in my uniform shoes to avoid potential blisters," he said. "I've also been working on playing and marching at the same time which is a bit like riding a bicycle—It comes back, just not as quickly." 38-year-old Dennie Hirsch, who marched as a member of the Madison Scouts in 1997 and 1998, has been taking a similar approach to his own preparations. And his neighbors in his hometown of Edmonton, Ontario may have taken notice. "[Fellow Scouts alum] Matt Laird and I were able to borrow some marching tubas from Impact Performing Arts here in Edmonton. Using those, we have been literally marching around our streets playing, with a few late-night practices in the garage as well," Hirsch said. "A tuba does fill up the house with sound quite a bit!" Next week the more than 400 corps members will find themselves together in New York, where they'll have two short days to come together as an ensemble at Rockland Community College in Suffern. Despite the short time frame, they still have every confidence that they can pull it all together with the same Madison Scouts bravado and swagger that have been trademarks of the corps over so many years. "I'm really excited to experience the sound of a huge drum corps in the canyons of Manhattan, and with more than 230 brass players, we joke about bringing down windows," McInvaille said.

On the Parade Route 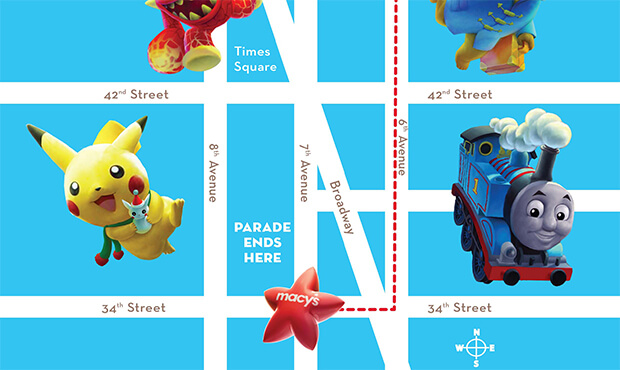 The parade route will lead the Madison Scouts through Manhattan to the Macy's flagship department store on 34th Street.
With the parade kicking off at 9 a.m., the corps has to be bused into Manhattan at 3 a.m. on Thanksgiving morning to rehearse for television. After the early wake-up call and rehearsal, corps members will take a break at St. Paul and St. Andrew United Methodist Church a few blocks from the starting line where they'll have an opportunity to rest, eat breakfast, and warm up prior to their step off. The three-mile march through the city winds from 77th Street south to 34th Street, where groups have a chance to perform for television cameras directly in front of the Macy's flagship department store. Current Madison Scouts members will don their white uniforms worn during the 2014 DCI Tour. Alumni members will wear dark green with a red sash and white spats, which is similar to how the organization's alumni corps appeared in 2006. "Color guard members will wear shades of red, so we'll have a holiday assortment of green, red and white out there," Komnick said. Along the parade route the Scouts will play an arrangement of "Santa Claus is Coming to Town." Upon reaching the grand entrance of Macy's, the group will perform a routine to "Happy Christmas," an arrangement that gives holiday flair to pop artist Pharrell Williams' hit "Happy." Along the way more than three million will look on from the parade route while nearly 50 million will be watching the television broadcast from home. "This will be largest single audience experience in the 76-year history of the Madison Scouts," Komnick said.

Thanksgiving With the "Family"

Beyond the early wake-up call, hours of rehearsal and having to rearrange their personal lives to be away from their loved ones on Thanksgiving, Madison Scouts members are relishing the opportunity to take part in this one-of-a-kind experience with so many generations of their drum corps "family." "It's rare to get such an opportunity to connect as performers with the different decades of young men that made the Scouts who they are today," Hirsch said. "It's a great feeling to see how many lives the Scouts have touched among these alumni." The 88th annual Macy's Thanksgiving Day Parade will air on NBC at 9 a.m. across the country on Thursday, November 27. The Madison Scouts will be one of 12 marching music ensembles in the parade and will appear toward the end of the three-hour broadcast just prior to the arrival of Santa Claus. Get an inside look at the corps' experience leading up to and on the day of the parade on Facebook (Madison Scouts) and Twitter (@MadisonCorps).