From the Glassmen Web site: June 25, 2006 The weather and the schedule finally caught up with the corps Sunday, as the cloud covered skies in France emitted a wet misty drizzle for the majority of the day, but it couldn't stop the Glassmen from taking Europe by storm! The corps was to leave for Calais, France, for a parade first thing in the morning, but was delayed due to some complications with the lunch scheduled. So after a hearty morning brunch, the corps departed Saint Quentin at noon for the two-and-a-half hour trip to the coastal city. 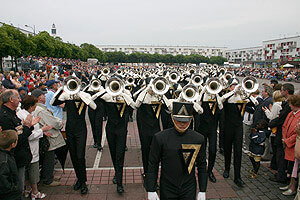 Calais is a city of about 75,000 people, overlooking the Strait of Dover, the narrowest point in the English Channel (only 21 miles wide), and as such is the closest French town to England. On a clear day, you can even see the white cliffs of Dover! The center of town is actually a "man-made" island surrounded by water and canals on all sides. Calais is also home to the French side of the Eurotunnel, where the corps passed through on its first day into Europe. When the corps arrived in Calais, they suited up for the parade through the city center. The festival - called "Les Estivales de Calais" - is typically held throughout the weekends of July and August each year. When they had the opportunity to have an American drum corps participate in the Grande Parade kickoff, they moved it up one weekend to allow the Glassmen the chance to perform in the festival. They were more than happy to comply! The Glassmen have been making daily updates about their European trip. Read more on www.glassmen.org.