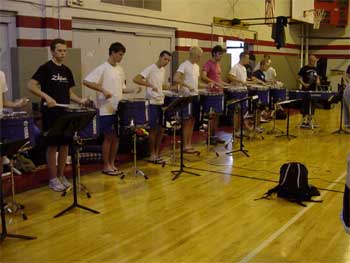 Capital Regiment's drum line hammers out a riff at their first audition camp.
This weekend marked the beginning of the 2004 season for the Capital Regiment. More than 200 prospective members attended this first audition camp at Walnut Ridge High School in Columbus, Ohio. The camp began Saturday morning after a Friday evening banquet that celebrated the success of the 2003 season.

Program coordinator Wayne Dillon was very pleased with the weekend. "This was an amazing turnout with amazing results. There was tremendous energy and intensity from those in attendance," Dillon said.

Percussion caption head Kevin Murphy echoed Dillon's thoughts. "I am very pleased with the turnout and talent level of the students who auditioned this weekend. The percussionists came well prepared which allowed us to begin playing music that will be used during 2004," Murphy said.

At the end of the weekend, everyone in attendance gathered in the gymnasium for a closing "show and tell" session. The pit was showcased first, followed by the guard. At the conclusion of the session, the brass and percussion sections played through a 2004 parade tune.

Announced this weekend was Capital Regiment's 2004 production entitled "Celebration of Life: Mind, Body, and Spirit." Brass arrangements for this year's production are being written by Jay Bocook, with Kevin Murphy writing for the battery and Kate Tice writing for the pit.

Capital Regiment director Rick Bays announced at the show and tell session that the horn line and percussion sections will be playing on new Dynasty equipment this season. New trumpets, mellophones, baritones, and euphoniums arrived in time to be used at the first camp, with the tubas expected to arrive in January. A special thanks goes out to the Glassmen from Capital Regiment for providing tubas for this first camp. New battery and pit percussion equipment will also be arriving later this winter.