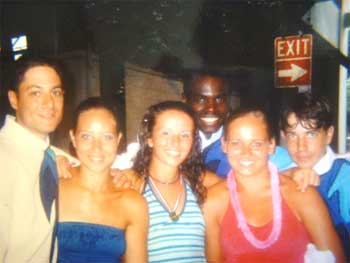 Andrea Reedy sent in this one. "This picture is of me and five of my friends at Division II & III Finals in 2003. We were all with the Lehigh Valley Knights in 2002 and then moved on together to Jersey Surf in 2003. We are (from left to right) Trevor Santora (bass), me (guard), Rachael Hyde (guard), Devon Jackson (contra), Allee Phillips (guard) and my brother, Ricky Reedy (baritone). Only three of us went on to march with Jersey Surf in 2004 (Trevor, Ricky and I)."

Thanks Andrea!
E-mail your Forzato submissions -- and we will get to them all, in time (and we're posting them in the order they were received) -- to dave@dci.org along with where and when the photo was taken. Send some biographical information about yourself as well. We'll give you full credit. Also, let us know if you want your e-mail address included.