Brian Hooker, who marched as a soprano player in the 1981 Sky Ryders, submitted the following column. My son, Steven, is the ultimate drum corps fanatic. As his dad, I couldn't be prouder. He had his first experience with drum corps, before he was born, when my beautiful wife pointed her very pregnant belly toward the Santa Clara Vanguard playing strains of Bernstein in their 1997 "Fog City Sketches" show in Boise, Idaho. By the time my son was able to request his own videos and DVDs, he was choosing various DCI championships selections in my library. We were lucky if we were able to watch anything but drum corps. Not that I minded. Now that he is eight years old, he reads drum corps books, watches drum corps videos and DVDs, requests to watch streaming DCI.org video on the computer. He drums on anything he can get his hands on, and I'm sure he'll be getting his first set of tenor drums very soon. However, one of the most unique things about my son is that he has autism. 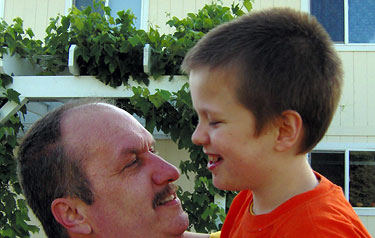 Brian Hooker with son Steven.
Steve was diagnosed with regressive autism back in 2000 and has since taken on a daily challenge to overcome the obstacles he faces. Like many children with autism, he possesses a very low attention span, suffers with language delays and has various repetitious behaviors he enjoys. In addition, Steve has extreme sound sensitivity and must wear ear protection when he is in a public place. In order to overcome these issues, we work with Steve daily in his therapy playroom using a home program that emphasizes social interaction. Our main focus is using any of his interests to sustain meaningful interchanges between him and us or the volunteer child facilitators that work with him. These interactions are the doors that open up our world to him. Much to my delight, drum corps is one of Steve's main interests. Although he generally cannot speak, he will approximate the words "drum corps" and "drum" regularly when we watch drum corps on television or when we "play" drum corps in his therapy room. Noting that one of his favorite shows is 1978 Santa Clara Vanguard, my wife picked up two hula-hoops to add to his collection of toys. Now on any given day, my son and I try to re-create the guard work to the "Gayne Ballet Suite," "Jupiter" (from 1980) or "Slava!" (from 1981 and 1982). Oh, but wait a moment. Children with autism aren't supposed to participate in "pretend play." Not so! We've been able to capitalize on his interest in drum corps to awaken his imagination such that when encouraged, he can "become" a drummer, bugler, guard member or drum major. Steve's toy arsenal now includes many drums, a "bugle" kazoo, jingle bells, a tambourine and a fully functional marimba. We use all of these to help captivate his attention and foster meaningful interactions with him. By the way, the marching tympani wouldn't fit through the front door! In addition to this, a significant portion of his therapies involve asymmetric meter, giving me a chance to work up other favorite tunes like "Take Five," "Niner-Two" and "Blue Rondo ala Turk." When Steve recognizes the song, he flashes a big smile and is all the more willing to participate in the exercise. Now if I can just get him to learn the snare part to "Stone Ground Seven" (1980 SCV). Steve's favorite shows are the 1978 27th Lancers (opener "Carmen" and closer "Gaite Parisienne"), and Santa Clara Vanguard ("Overture to a New Era," "Gayne Ballet" and "If You Believe"), 1981 Madison Scouts (opener "Numero Uno," and closer "Through the Eyes of Love,") and Sky Ryders (opener "Faces" and closer "Here's That Rainy Day/Over the Rainbow"), 1982 Garfield Cadets (Gershwin and Nelson show), and the 1991 Sky Ryders ("Camelot") and Cadets of Bergen County ("The ABCs of American Music"). He plays the "Camelot" show whenever he gets a chance. He especially loves big color guard moves and any type of humorous antics. The Lancers' 1978 rendition of "Gaite Parisienne" with the pompons, quad rifle toss and cymbal line summersaults always make him laugh. My hope is to complete my DVD collection in the near future so he can enjoy the full history of Drum Corps International. I keep telling my wife that this would be vital to enhance Steve's educational experience, but she knows better ... This past summer, Steve was able to attend his first live drum corps show, Drums Along the Columbia in Pasco, Wash. With the assistance of the event staff, most notably Maria Allan, we were able to view the show from the press box. Despite his strong fear of crowds and loud noise, he had a wonderful time seeing and hearing first-hand the object of his affection while getting a sampling of both drum corps merchandise and stadium food. All the corps that performed mesmerized him, including Santa Clara Vanguard, Blue Knights, Seattle Cascades, Oregon Crusaders and Spokane Thunder. There were many highlights for him that evening, but the biggest were seeing SCV's "Moto Perpetuo" show and meeting my good friend, Drum Corps International visual judge Lee Carlson. Given Steve's intelligence, intuition, love for people and dogged tenacity, my wife and I expect him to fully emerge from autism. I've told my wife to look forward to become a "corps mom" as early as 2012 (when our son turns 14), and I will gladly do my part working the concessions stand.