Michael Pease chairs the DCI Division II & III Great Lakes Open in Michigan City, Ind., and has long been involved with one of the Cavaliers' home shows also in the area. You'll notice that this weekend is an important anniversary in Mike's life. This is a story of survival. Maybe it will encourage some Fanfare readers to never give up! My season started just like the drum corps season, in the fall of the year. I was diagnosed with lung cancer on October 22, 2005. I was now in a fight for my life. I have been a volunteer with the Michigan City, Ind., summer festival committee since 1998. My job was co-chairman of the Cavaliers' annual home show here and more recently chairman of the DCI Great Lakes Open Division II & III show. My history with drum corps goes back to 1969 when I marched with the Maple City Cadets from La Porte, Ind. 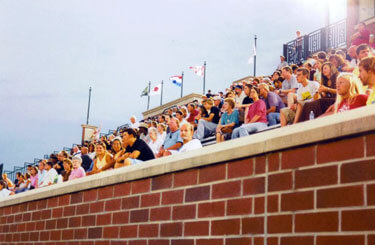 Drum corps fans look on from the stands at the
2006 Great Lakes Open in Michigan City, Ind.
After I was diagnosed with cancer, I thought to be fair to everyone, I better leave the committee so they could find someone to take over the job of getting all the work involved done. To top it off, I had three shows to organize. The Great Lakes Open is a two-day event. My doctor had told me to get my affairs in order. I knew I was in serious trouble. When I told our committee chairman, Joe Doyle, he asked if I could help get the initial work done. I agreed, but told him my health would be rapidly failing. I also had to inform the Cavaliers and Drum Corps International because they depend on me getting the job done. In November and December, when a lot of paperwork for the shows gets started, I started a full schedule of radiation and chemotherapy treatments as well as doctor visits. Sometimes I had five appointments and tests every day of the week. I was seriously sick. The Cavaliers sent me a card and a DVD, and I got many well wishes. That was great, but I was in a battle for my life. My tumor was the size of a softball. I thought my drum corps days were over. I even made my funeral arrangements and left instructions to be buried in one of my Cavalier shirts. I had surgery in January. Only two surgeons could be found to do the surgery. The operation was in Chicago and lasted five hours. I had half of my right lung and seven lymph nodes removed. When I woke up, I said, "I made it out alive." The doctors said they got all the cancer. The recovery has been slow, but steady progress has been made. I had some follow-up chemotherapy and some breathing rehab. But hey, I've got three shows to run. At first, I couldn't get from the living room to the bedroom without help. My wife, Robin, has been there for me all the way. I love her and without her I don't know where I'd be. She's bathed me, run errands for me, taken me to the doctors, and everything else a person in my situation needs. I got all the work for the three shows done and when the Cavaliers' Pageant of Drums show came, with the help of some great people and a golf cart, I was able to get around. The night of that show, my emotions overwhelmed me many times as people would come to see how I was. I broke down in tears many times that night. I knew I would have many of the same emotions again during the Great Lakes Open which is the weekend before the DCI World Championships. After all, I thought I would never be where I am today. Some of my old drum corps friends came in with the corps and I knew I'd break down again, but it's only because I was happy to see all of these old friends. 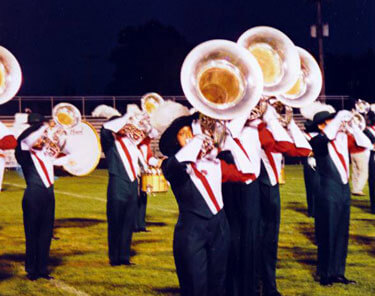 Vanguard Cadets perform in Michigan City, Ind., at the 2006 Great Lakes Open.
The Great Lakes Open was a huge success. We had good crowds both days and the weather was good. If I didn't have great volunteers and a golf cart I would have been lost. The weekend of the shows, my emotions got to me a couple of times while at the schools visiting the corps. I was able to hold it together at the stadium until Vanguard Cadets director George Brown approached me and invited me to breakfast with the corps before they left on Monday. I broke down and went into the home locker room tunnel to compose myself. Robin said that shows that the corps appreciate everything we do. That's why I lost it. I knew they were showing their friendship toward me. I couldn't get to any other shows this year. I can't walk the big stadiums yet. It's too much of a struggle. But I'm working on it. Maybe next year I'll make it. My recovery continues although at times my breathing becomes labored. I do the best I can. Because of my health I've decided to take an early retirement from my job. I've put in 28 years in the steel mills and it's taken its toll. Robin and I will travel a little and hope I can continue to get better. I know it will be a tough road. The drum corps season is over and so is my first year since I became sick. I owe a lot to many people. But, drum corps has given me something to do and has kept me connected with everyone. The doctors say my upbeat attitude helped me through this ordeal. I kept my sense of humor and kept moving forward. The heat of the summer will be gone and the leaves will turn color and another drum corps season will begin. And in the end, all I have to say is thank you to my drum corps family and never, ever give up no matter what. You'll be surprised what you can accomplish.