The end of the 2008 season is approaching! The DCI Fan Network is one of the best places to get all the latest videos from corps as they compete during World Championships week. The reduced subscription price of $39 includes Live Webcasts from the Open and World Class Semifinals and just-added OnDemand video from both nights of the DCI Eastern Classic in Allentown, Pa.! Brush up on everyone's latest changes, hold on to your hats and check out even more of the exclusive Fan Network offerings from the past week below... Visit the DCI Fan Network. 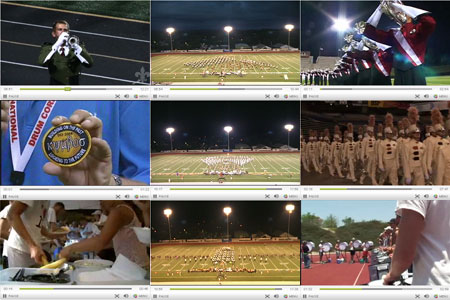 The Academy Who needs to take a morning run when you could shadow-box instead? The Academy drum line gets amped up for the day ahead in a "Life on the Road" video. Visit the Academy Fan Network.

This week is your last chance to get in on the Live Webcasts from the Open and World Class Semifinals, but the even lower Fan Network subscription price of $39 will keep you humming into the off-season with OnDemand post-show replays from contests this season, exclusive World Class corps content, and DCI audio and video archives back to 1972! The DCI Fan Network is the next best thing to having your hair blown back and your teeth rattled by your favorite corps, in venues across the country. Subscribe to the Fan Network today.