Only 12 days until the drum corps season begins, but fans can get a head start by checking out what their favorite corps have been up to the last few weeks through the new Drum Corps International Fan Network! Here's some of the latest … Visit the DCI Fan Network 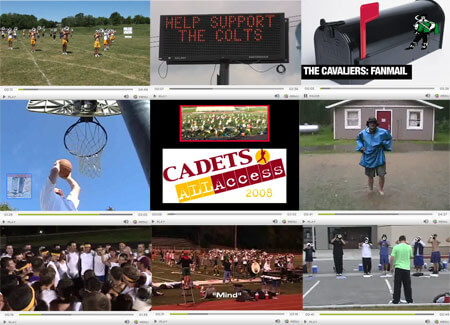 Blue Devils The Blue Devils took some time out to record their show this season, titled "Constantly Risking Absurdity," and they're giving the fans the chance to listen in on the music exclusively through the Fan Network. Visit the Blue Devils Fan Network

The Cadets Jeff Sacktig, visual designer for the Cadets, gives some insight about designing their performance "…and the pursuit of happiness" while the drum line shows off their chops as the corps works through the show movement titled "Round Four." Visit the Cadets Fan Network

Carolina Crown The 15th edition of the CrownMinute feature gives fans a look at the horn line jamming out, jazzing it up, and having fun to a slightly out-of-season holiday tune. Visit the Carolina Crown Fan Network

The Cavaliers In their first "Fan Mail" video, members of the Cavaliers share their impressions about marching and playing the corps' 2008 show, "Samurai." Visit the Cavaliers Fan Network

All of this and more … at your fingertips … 24/7! The '08 DCI Summer Tour has already started online! NOW is the time to join the all-new Fan Network through DCI.org or through the Web site of your favorite corps. Visit and subscribe to the Fan Network now.