As week three of the DCI Summer Tour begins, competition is heating up and fans are making sure they're getting complete coverage of their favorite corps with exclusive video content through the DCI Fan Network! This past weekend brought fans a Live Webcast from Stanford, Calif. and OnDemand playback of performances from Kalamazoo, Mich. Here's some of the other great content new from Drum Corps International's World Class corps ... Visit the DCI Fan Network. 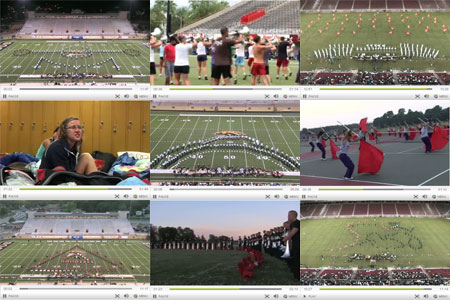 Bluecoats In the Bluecoats' "Live Minute 1.8," fans can see corps members as they get back to "basics" with their morning visual rehearsal block. Visit the Bluecoats Fan Network

Colts The Colts get warmed up and in the zone for a show in one of the latest videos from "Iowa's Ambassadors of Music" on the Fan Network. Visit the Colts Fan Network

This week the Fan Network brings drum corps fans even more exclusive video performances with OnDemand playback of performances from the FirstBEAT event in Columbia, S.C. and a Live Webcast from Drums Along the Rockies in Denver, Colo. For the low subscription price of $69, you can get complete access to all of the incredible video content flowing through the Fan Network and much, much more! Subscribe to the Fan Network today. Learn more about the Fan Network.