Hey drum corps fans! Sit up and take note—Drum Corps International's World Class corps have been busy uploading their latest video clips and podcasts from the road to the brand new DCI Fan Network. Here's just a taste of what more than 1,000 Fan Network subscribers have been experiencing since the launch of the brand new site less than three weeks ago ... Visit the DCI Fan Network 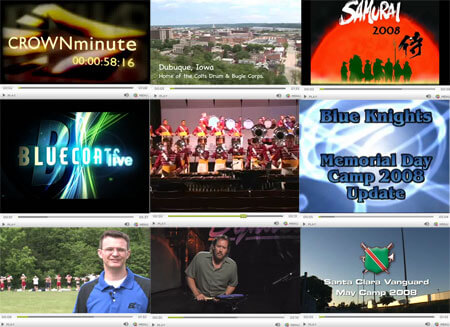 Blue Devils Blue Devils percussion director Scott Johnson debuts season two of the "ScoJo Lick of the Week" exclusively on the Fan Network. Drum along with ScoJo as he demonstrates and helps you learn some of his most challenging licks. Visit the Blue Devils Fan Network

Blue Knights Take a look at the '08 Blue Knights at their Memorial Day weekend camp in a feature with member interviews and rehearsal clips. Visit the Blue Knights Fan Network

Blue Stars The Blue Stars have been posting frequent updates from their spring training rehearsal facility in Trafalgar, Ind., giving fans an inside look at the life of a corps member starting off a new drum corps season. Visit the Blue Stars Fan Network

The Cadets The Cadets give curious fans a look at the corps' 2008 production "…and the pursuit of happiness" in several sneak peek performance clips. Visit the Cadets Fan Network

Colts The Colts posted clips from the corps' performance in the 2008 Dubuque Memorial Day parade with interviews detailing the importance of the organization to the Dubuque, Iowa community. Visit the Colts Fan Network

Both free and subscriber-only content will be uploaded on a daily basis during the 2008 Drum Corps International Summer Tour giving fans ultimate access to their favorite corps 24/7, all summer long. With unlimited access to the Drum Corps International audio/video vault, including all of the Top 12 World Championship performances since 1974, Fan Network subscribers also have access to live streaming video from select DCI events and post-show, on-demand replay videos as the season unfolds. All of this content, and more, is available for a new low subscription price of only $69. The '08 DCI Summer Tour has already started online! NOW is the time to join the all-new Fan Network through DCI.org or through the Web site of your favorite corps. Visit and subscribe to the Fan Network now.