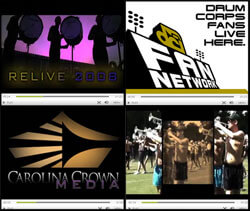 The 2008 Drum Corps International Summer Tour has come and gone, but new content keeps popping up on the DCI Fan Network. A $39 subscription to the Fan Network lets you check out exclusive video clips from World Class corps, gives you access to OnDemand performance archives from select '08 Drum Crops International events, and gives you special discounts on the latest Audio Performance Downloads – now available from the World Championship Open and World Class Quarterfinals. Don't miss out on these recent additions … Visit the DCI Fan Network.

Carolina Crown Carolina Crown has released a new series of audio downloads from their "Field Studio Project" which features various segments of the corps' 2008 program "Finis" played by isolated sections (brass or percussion) as well as the full ensemble. Select downloads cost as little as $0.99 for Fan Network subscribers. Listen to samples on the Carolina Crown Fan Network.

Glassmen The Glassmen posted a teaser trailer for their annual tour DVD which will showcase the corps' 2008 season as it happened both on and off the football field. The DVD will be released in the coming months. View the trailer on the Glassmen Fan Network.