One month until a champion is crowned at Memorial Stadium in Bloomington, Ind., and Drum Corps International wants to make sure you can follow the Summer Tour every step of the way through the DCI Fan Network! The latest OnDemand video playback of "Drums Along the Rockies" in Denver, Colo. and DCI Orlando in Florida is available, with another Live Webcast this weekend from the DCI Southwestern Championship in San Antonio on the way! Here's even more of the incredible content DCI's World Class corps have been offering in the past week... Visit the DCI Fan Network. 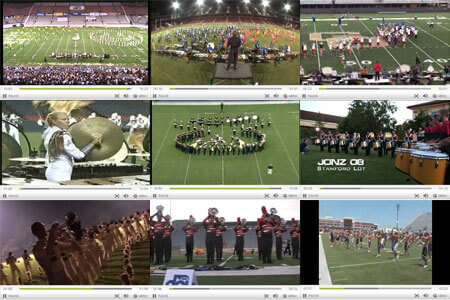 The Cadets Cadets director George Hopkins and the voice actors behind their production "...and the pursuit of happiness" go in-depth about the scenes and narration in a recent Fan Network video. Visit The Cadets Fan Network

Carolina Crown "CROWNminute" number 42 has the corps jamming out in an encore to a little bit of Earth, Wind & Fire's "September." Visit the Carolina Crown Fan Network

Colts It was a busy week on the road for Colts members, but they give fans an inside look at July 4 parades and more in a recent Fan Network video. Visit the Colts Fan Network

Glassmen Snare drummer Wes Barton introduces himself and gives his drum corps background in the latest video from the Glassmen. Visit the Glassmen Fan Network

Mandarins The Mandarins are on the move, and you can hear from some of the corps members how the season has been going so far in the "Mandarins Mid-Summer 2008 Update." Visit the Mandarins Fan Network

Phantom Regiment "Phantom Pheature 4" shows some of what the corps does during its off time, and no, it definitely isn't playing more classical music. Visit the Phantom Regiment Fan Network

For the low subscription price of $69, you can get complete access to all Live Webcasts, OnDemand post-show replay, exclusive World Class corps content, and the entire DCI audio and video archives back to 1972! Subscribe to the Fan Network today.