The 2008 Drum Corps International Summer Tour isn't winding down...it's heating up! You can catch the latest OnDemand video from all 20 World Class corps that competed in Atlanta this past weekend, and as this season rounds third and heads for home, those fans who aren't yet Fan Network subscribers can still get on board with a new reduced subscription price of $39! The price is lower, but there is more content than ever. Here are some of the offerings from the corps you may have been missing out on ... Visit the DCI Fan Network. 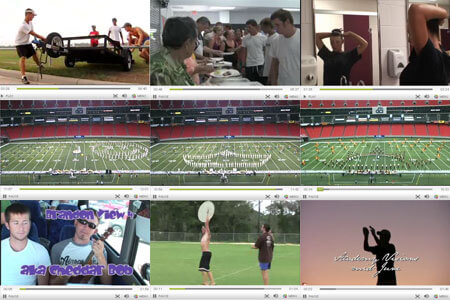 The Academy A bird's eye view of the Academy's San Antonio performance has been made available for download in two different aspect ratios, both for less than a dollar! Visit the Academy Fan Network.

Blue Stars "Blue Stars in Motion #14" follows some of the members of the corps during a free evening on the beaches of Pensacola, Fla. Visit the Blue Stars Fan Network.

Bluecoats Fans can see the "Bloo" team's drum line at work and at play in "Bluecoats Live Minute 2.6." Visit the Bluecoats Fan Network.

The Cadets From setting up the scaffolding to stepping into the stadium in San Antonio, fans can see it all in one of the latest Cadets videos. Visit The Cadets Fan Network.

Carolina Crown The 48th "CROWNminute" gets on the bus with the corps en route to a show as they rock out to what might be "the ultimate hype song." Visit the Carolina Crown Fan Network.

Colts The Colts got a warm welcome and some local hospitality in Natalia, Texas, which they repaid with a concert for fans and supporters. Visit the Colts Fan Network.

Crossmen The Crossmen front ensemble takes listeners "Across the Universe" in a video from the lot in Orlando. Visit the Crossmen Fan Network.

Phantom Regiment Pre-show hair care is the subject of "Phantom Pheature 6," detailing the art of a "show bun." Who knew so much work went into what's under the helmet? Visit the Phantom Regiment Fan Network.

Spirit The Spirit horn line takes "warmed up" to a whole new level as they pull out "Georgia on My Mind" in a lot video from Kalamazoo. Visit the Spirit Fan Network.

The new, even lower Fan Network subscription price of $39 gets you the Open and World Class Semifinals Live Webcasts, all OnDemand post-show replays from contests this season, exclusive World Class corps content, and DCI audio and video archives back to 1972! With so much content, the Fan Network is the next best thing to being there in the stands (and in the lot, and on tour, and just about anywhere) with your favorite World Class drum corps! Subscribe to the Fan Network today.