It's the second week of this year's Summer Tour, and Drum Corps International's World Class drum corps are busier than ever uploading new videos, audio podcasts and other content to the DCI Fan Network! And with OnDemand playback of the Walnut, Calif. and Madison, Wis. events from this past weekend, you can now see full video performances from 18 World Class corps! There's so much more, and here's just some of what corps have been showcasing this past week... Visit the DCI Fan Network. 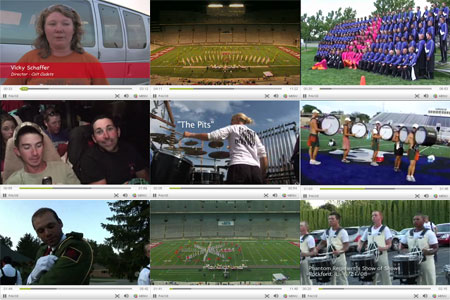 The Academy The Academy lets fans listen in on the corps' production "Vienna Nights," recorded recently for a preseason CD. Visit the Academy Fan Network

Blue Stars The sixth installment of "Blue Stars in Motion" features the color guard getting ready for another day of rehearsal with their morning flag block. Visit the Blue Stars Fan Network

The Cadets The Cadets have released three different videos of corps members in the snare, baritone, and bass drum sections showing off their chops exclusively to Fan Network subscribers. Visit The Cadets Fan Network

The Cavaliers A photo montage of Cavaliers members in their first performance of the season can be seen in "Still Life 05." Visit The Cavaliers Fan Network

Phantom Regiment In the third "Phantom Pheature," fans get a behind the scenes look at life with the Regiment, including the much sought-after lyrics to the finale of the corps' 1996 performance. Visit the Phantom Regiment Fan Network

Troopers "The Ghost Train Express" passed through Racine, Wis. last week, and a video of the Troopers performing their '08 program is available exclusively on the Fan Network. Visit the Troopers Fan Network

With a live streaming Webcast from DCI West in Stanford, Calif. and post-show On Demand video from DCI Kalamazoo in Michigan coming up this weekend, you're missing the action on the field and so much more if you're not a Fan Network subscriber! For only $69, you'll get access to all live Webcasts from select events this summer, OnDemand video playback, exclusive content direct from your favorite World Class corps, and more! Subscribe to the Fan Network today. Learn more about the Fan Network.