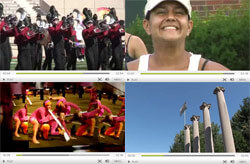 Content continues to pop up on the DCI Fan Network in the off-season and a $39 subscription lets you check out all the exclusive video clips posted by World Class corps during the summer of '08 and beyond. It also gives you access to the OnDemand performance archives from select Drum Crops International events, and gives you special discounts on the latest Audio Performance Downloads – available from the 2008 World Championship Open and World Class Quarterfinals. Don't miss out on these other recent additions… Visit the DCI Fan Network.