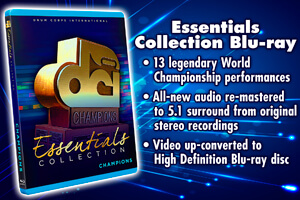 The Blu-ray disc is currently available for pre-order from DCI's online store, and will also be available to take home for the very first time this Saturday, July 21 at the DCI Southwestern Championship in San Antonio.

"Essentials" includes 13 performances from seven corps, spanning 35 years of Drum Corps International history. Included are some of DCI's most-loved and most-remembered Championship shows, including a previously unavailable performance of the 1973 Santa Clara Vanguard from historic Warhawk Stadium in Whitewater, Wis.

What people are saying

Although "Essentials" will not be available until the DCI Southwestern Championship, fans and drum corps enthusiasts across the country have already been able to preview the Blu-ray at many DCI Tour events this season.

Here's what some well-known drum corps personalities had to say:

"This is exactly how I remember these corps sounding. The details are all there!"

"'The Essentials' delivers every voice, every counter-line and every attack exactly the way I remember it that night from the sideline. The clarity and depth is amazing! Without question, this is a restoration not a remix."

Stop by the Drum Corps International merchandise booth in the Festival Marketplace at the Alamodome this Saturday, or order your copy today from the DCI online store.

This single-disc Blu-ray which comes encased in a collectible box, is priced at $59.