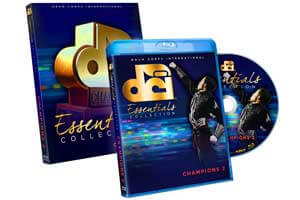 The new Blu-ray disc is currently available for pre-order from DCI's online store and is expected to begin shipping the last week of May.

Included are some of DCI's most-loved and most-remembered Championship-winning shows, including DCI's very first, the 1972 Anaheim Kingsmen which is a rare performance that has never been offered on a DCI video before.

One of the highlights of the Essentials Collection is impeccable sound that's been meticulously re-tooled and re-mastered to make it as close to what audience members sitting on the 50-yard line of the stadium heard in person.

"The bulk of what we've done in re-mastering these performances relates to taking the source recordings and using today's technology to open them up and clarify them through the use of equalization and judicial use of compression," said Tom Blair who served as executive producer of both volumes of the Essentials Collection. "We've been able to separate the voices again, in a way that as a listener if you want to really focus on what the baritones are playing, you can now. In your mind's eye you can isolate on a given horn voice and with clarity you can now hear what the bass drums are playing, We've gone in and chiseled away the clutter."

The Making of the Essentials Collection

Priced at $59.95, the Essentials Collection – Champions 2 is now available for pre-order with expected availability the last week of May.


The new Champions 2 Blu-ray also is available with the first volume of the Essentials Collection which was released last summer. You can save $20 by purchasing both volumes together.

Learn more about volume 1 of the Essentials Collection.