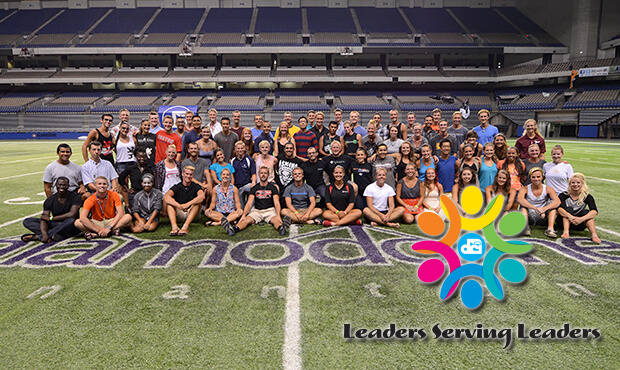 Corps members leaders gathered for a reception following the 2014 DCI Southwestern Championship in San Antonio.
Drum Corps International's newly launched "Leadership Initiatives Annual Fund Campaign" will support programs intended to develop the student leaders participating in Open and World Class drum corps today and for years to come. "The marching members who stand out as leaders within the ranks of Drum Corps International's participating corps are extremely important to the ongoing success of Marching Music's Major League," said Susan Kuehnhold, DCI Director of Events and Corps Relations. "Through their willingness to selflessly rise above the status quo to demonstrate their exceptional commitment to their respective organizations, this network of standout performers exemplifies the values of the drum corps experience at the highest level. They are the linkage between their organizations' past, present and future." Annually, Drum Corps International organizes a variety of leadership programs for corps members during the summertime DCI Tour and beyond, including: DCI Drum Majors Summit: An annual event bringing past and present drum majors, administrators and instructors together to develop performance and administrative skills as well as network with others. DCI Leadership Tour Rap Sessions: Events bringing together all corps member leaders to network and socialize during the summer tour. Jim Jones Leadership Scholarships: Awarded annually to the top drum majors in both the World and Open Classes. DCI Leadership Webpage: A site for leaders that hosts short teachings, easy-to-use tools and thought-provoking possibilities of best practices while serving their corps. DCI Hall of Fame Mentorship: Ongoing personal and online networking with the finest of the marching music activity. First awarded in 1997, programs like the Jim Jones Leadership Scholarship has been in existence for more than 15 years. As of 2008, the scholarship, which recognizes drum majors who exhibit unparalleled leadership qualities, has expanded to include awards for both World and Open Class corps members. "Beyond scholarships, we've also have had the opportunity in recent years to develop additional programs to support the training of current and future student leaders," Kuehnhold said. "These initiatives have been a valuable tool in the development and training of corps members in several ways, in addition to the establishment of an ongoing program to train new leaders from within our various performing ensembles." One of the newer programs to become a part of the Drum Corps International Leadership Initiatives, is the DCI Drum Majors Summit, an event held in conjunction with the organization's annual winter business meetings. Since being launched in 2010, the workshop has given more than 100 drum majors from World and Open Class corps the opportunity to gather in the off-season for a series of interactive activities and discussions. Bringing individuals together from all across the country, the sessions are designed to hone leadership and problem solving skills, while also giving students the important opportunity to network with each other. "The thing that I learned the most about while being here is simply that all across the board no mater what corps and no matter where you're from in the country, we all have these same issues and that there are different ways to go about [resolving] them," Oregon Crusaders Drum Major Nick Bledsoe said after attending the Drum Majors Summit last February. Hear what corps member leaders have to say about attending the DCI Drum Majors Summit:

One hundred percent of the proceeds from donations to the Leadership Initiatives Annual Fund Campaign will directly support the ongoing development and operation of Drum Corps International's Leadership Initiatives, from funding scholarships to offsetting housing and travel costs at the annual DCI Drum Majors Summit, and more. You can donate online or contact Drum Corps International at donor@dci.org or 317.275.1212 for more information on how you can support the long-term success of DCI's student leaders. Donation Amounts $25 – Shako $50 – Baton $100 – Podium $250 – Bronze Medal Society $500 – Silver Medal Society $1,000 – Gold Medal Society $5,000 – Founders Trophy Society.