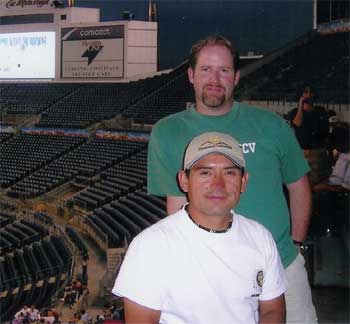 Matt London (top) and Ben Barahona
Recently we called on drum corps fans to "spread the word" about drum corps to the uninitiated invited longtime fans to become marching music evangelists. Matt London, DCI fan since 1986, sent in this pic. "A native of El Salvador, Ben Barahona joined me on the drive from Salt Lake City, Utah, to Denver for Drums Along the Rockies. Although he was admittedly bored while we watched a corps rehearse in 100-degree heat Saturday afternoon, he loved the actual competition that night at Invesco Field at Mile High. His favorite corps: The Crossmen. He is hopeful that he will be able to attend the competition again next year. Looks like we have an international convert. Hopefully finals will return to the West again, so he can have the ultimate DCI experience." Thanks Matt! We're asking each of you to reach out and spread the word about the drum corps activity. Knock on doors, e-mail, instant message, even yell if you have to -- but this is the summer for you to bring a friend to a DCI show. Bring a digital camera to the show and take a picture with your new drum corps convert at the show, and send it to dave@dci.org -- we'll post pics as they come in under the headline, "New convert." Great seats are still available at most DCI shows. Pick up the phone, make your pitch, and we'll see you on the 50.