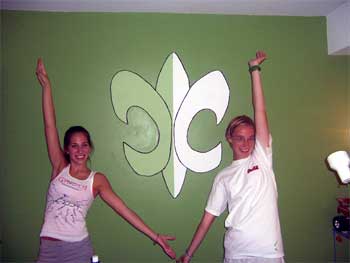 This summer we called on drum corps fans to "spread the word" about drum corps to the uninitiated -- the news story HERE invited longtime fans to become marching music evangelists. Heather Madden sent in this one. "The picture attached was taken the Thursday before finals in my younger brother Joe's room. He plays the soprano for the Madison Scouts. He really had a great summer and we all had a wonderful time following him when we could. "He marched in the Racine Kilties with our mom, aunt and stepdad the last two summers, so I have had many drum corps summers and am looking forward to future ones. My boyfriend, my family and I all try to see as many shows as possible and at the Madison show, we brought along my boyfriend's whole family. "The show was rained out RIGHT when the Scouts were supposed to perform and Hannah (left) was so disappointed that we brought her to the Cedarburg, Wis., show a week later. There, she became hooked and traveled with us to the Kalamazoo show and went with her mom to the Indianapolis show. "When I expressed to her my idea of surprising Joe with a painted wall in his room, she was MORE THAN WILLING to help out. She is now a hard-core Madison Scout fan and is very excited to come with me to the first camp to watch. Yay for new converts!" Thanks Heather! We realize the summer is over, but if you brought a "new" drum corps friend to a DCI show this past summer, send us a pic and we'll acknowledge you! But then this winter, you've got to promise to keep those drum corps passions burning, and inspire your new converts to bring friends to DCI shows next summer!