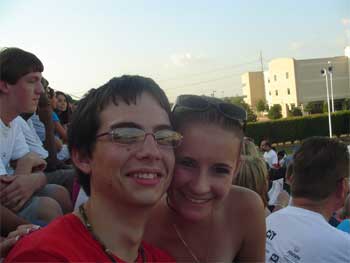 This summer we called on drum corps fans to "spread the word" about drum corps to the uninitiated - invited longtime fans to become marching music evangelists. Peter Dougherty sent in this one. "I marched soprano for the Madison Scouts in '03 and '04 and took a break this year to take some college courses so I could march then next 3 years. Since this was my first summer off, I decided to take a different role in drum corps, a fan's view. Being on the other side of the field was different at first, then very insightful. I took my little brother Derek and his girlfriend Sarah to the Dallas show this summer. "This was his third or fourth show since he had come to see me in Denver and Orlando the past two seasons, but it was sarah's first show. This picture is of both of them in the stands waiting for the Blue Devils to come on. We had gone to watch them rehearse at a high school earlier in the day but were eagerly waiting for them to perform." Thanks Peter! We realize the summer is over, but if you brought a "new" drum corps friend to a DCI show this past summer, send us a pic and we'll acknowledge you! But then this winter, you've got to promise to keep those drum corps passions burning, and inspire your new converts to bring friends to DCI shows next summer!