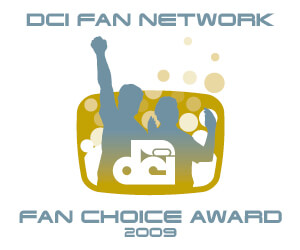 You've been watching them all season long on the DCI Fan Network...and now your chance has come to pick a winner! The all-new DCI Fan Network Fan Choice Award will be awarded to one World and one Open Class corps at the DCI World Championship Finals this Saturday, Aug. 8. It's all up to you!

Here's how you can be part of the action:

2. Click on the Fan Choice Award graphic on the video tab.

3. Pick your favorite Open and World Class corps from 2009.

It's as simple as that!

Need a refresher? Check out complete corps performances in the "On Demand '09" video section. New videos from the Open Class Quarterfinals have just been added, with World Class performances available from the recent DCI Eastern Classic. Also don't forget, the Open AND World Class Semifinals will be Webcast live this Friday to give you one last chance to sway your opinion as you work to pick the winners.

Pick your favorites before 11:59 p.m. ET on Friday, Aug. 7, and votes will be tallied shortly after. The fan-favorite Open and World Class corps will be announced and recognized with the Fan Choice award during their respective World Championship Finals awards ceremonies on Saturday, Aug. 8.

Fan Network subscribers have it all, from unlimited access to the Drum Corps International audio/video vault, to live Webcasts from some of DCI's most exciting events, to on-demand replays of select corps performances available from the '09 summer season.