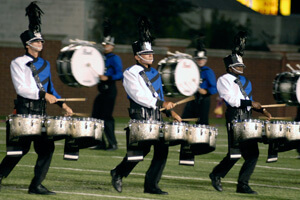 Blue Devils B
More than a month after the Pageant of Drums DCI Tour event during Independence Day weekend, Drum Corps International returned to Michigan City, Ind. Tuesday, Aug. 10 for the World Championship Open Class Quarterfinals. On the turf of Ames Field, Blue Devils B (95.80) confidently established themselves as clear leaders, nearly five points ahead of their closest competitor, the Oregon Crusaders. But many new faces have the potential to break into the coveted Top 12, including the brand new corps Forte and Genesis, the returning Music City and Colt Cadets, and the Spartans, who re-emerged this season after a year-long hiatus in 2009. After winning the Quarterfinals event, Blue Devils B color guard captain Tanya Trowbridge says the corps plans to keep doing what they've done all season, pushing through the hot weather and performing each show better than the last one. "At the end of the year we don't want to think, 'we could've done that better,' or 'oh man, I should have practiced harder in June or July.' We just want to think, 'that was the run-through of my life.'" 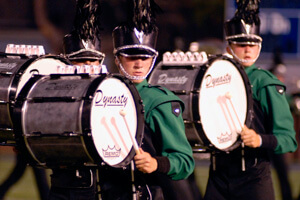 Oregon Crusaders
Oregon Crusaders (91.00) took the second place slot with their 2010 program "Dance of the Flames." In one year, the corps has advanced from 8th place to 2nd at the Quarterfinals, more than five points ahead of last summer. "You could feel just a lot fire on the field," said sixth-year Oregon Crusaders member Alex Fiori. "Our performance was fantastic. I've been in this stadium a few times before and it's never felt like that." Finishing in third were the Spartans (89.75), roaring back after a year away from the field. Spartans Drum Major James Fortier said the corps had its best show of the season Tuesday, performing with confidence and with the drive to succeed. "I think we came into tonight thinking that we do have a shot for a medal, especially after taking time off and trying to regroup our organization. This show meant a lot for us tonight." Fortier said many corps members were first-time drum corps participants, but that they've come a long way in finding their true identity with the Spartans. "I think tonight was the first time that we knew who we are as a corps," Fortier said. "We're just trying to work as one unit striving for one goal. 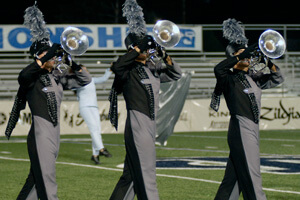 Revolution
Revolution (88.35) nabbed the fourth place position with "Fade to Black." About a point behind were the Raiders (5th, 87.40), who showcased their 2010 program "Platinum Celebration" in honor of the corps' 20th year on the field. In only its second year on the World Championship stage Music City (6th, 85.45) is making great strides with its crowd-pleasing production "River Sounds." 7th Regiment finished in 7th place Tuesday, scoring 84.55. Snare drummer Sean Corbett, who has marched with the corps for four years, said 7th Regiment members were thrilled to perform under the lights Tuesday night. "I would say there was maybe a bit of excess energy," he said, "but otherwise it was a good performance." As an age-out member, the main focus for Corbett is achieving excellence. "I want to march one last show and not only say I did the best I could, but that my entire section did the best we could, and that there's nothing more we could've done to make this show any better." 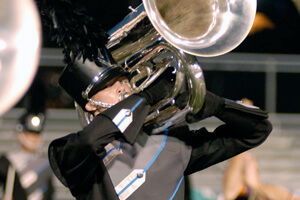 Legends
Just .35 behind 7th Regiment was Legends (8th, 84.20), who have made strong improvements to both the musical and visual aspects of their program, "Ruins." The Colt Cadets (9th, 81.55) have been regular Open Class competitors for several years and are putting themselves in a position to have their best finish ever. Two brand new Open Class corps, Forte and Genesis, tied for 10th place in Michigan City with a score of 80.850. Forte director Chris Green said the corps has surpassed original expectations, not only making it down the road but also thriving in competition. "This season has been amazing. We have a solid show and a solid corps; we've been traveling very well, and everyone seems to be having a good time," Green said. "Our goal is just to maximize out so that we have a lovely CD and recording of this show at the end of the season. The kids are having a great time and looking forward to getting started on next season as well. They want to do this again." 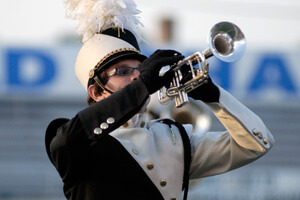 Genesis
Genesis is also new to the Open Class, taking the field with "One Night in the Valley" which showcases well-known tunes such as "Autumn Leaves" and "Malaguena." Director Chris Magonigal was thrilled with the corps' performance, calling it the best to date with potentially two shows still to come. However, corps members like 21-year-old trumpet soloist Joshua Castillo aren't letting success get to their heads. "It was one of our best performances we've had so far. But obviously we expect better from here on out, so this was just another show," Castillo said. "It feels great to know that our first year out, we came here and were not first to perform: we were actually the seventh, so that feels even better. I'm excited to see what the future brings." The Velvet Knights (12th, 75.85) stayed true to their history and brought a humorous and crowd-friendly program, "Magical Mystery Tour," to Ames Field Tuesday night. In 12th place, the corps has the chance to advance to the Finals competition for the second year in a row. 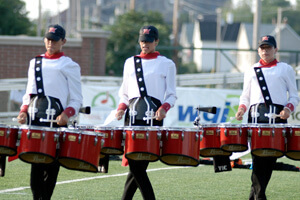 Velvet Knights
Fourth-year member James Teubner has seen many changes in the Velvet Knights and has high hopes for his final year with the ensemble. "I'm a charter member, and it's been really exciting to see this corps grow from a little Division III corps to what we are now, Open Class Finalists two years in a row, hopefully," Teubner said. "We really want to push toward getting into Finals and hopefully moving up a couple places. And I'm looking forward to the [Individual & Ensemble competition] Wednesday." The Racine Scouts (13th, 73.35) will advance to the Friday morning Semifinals at Lucas Oil Stadium. Les Stentors (14th, 72.50) from Quebec, Canada performed their rousing program "A New Day," which featured solos in the brass section and the bass drum line. International corps Str?¤ngn?¤s (15th, 72.20) scored just three-tenths behind Les Stentors. Though small, the corps executed well in its performance of "Passion Within." "For me the show went really well," said color guard member Cristin Mollberg. "[Our U.S. tour] has been fun. We're such a good team, and everyone knows everyone." The corps will perform in the Semifinals competition Friday, August 13, and like everyone else, will be fighting for a spot in the Top 12. But Mollberg said members are enjoying the opportunity to tour in the United States, especially since the corps hasn't been able to compete in DCI events every year. "We have done a lot of things we want already. [After competition] we just want to relax and have fun together." Wrapping up the Open Class performing corps were the much-improved Blue Saints (16th, 59.09) who will compete in the World Championship Semifinals for the very first time Friday. View a complete recap of scores from this event. Contributing to this report: Ryan Cain, Christina Mavroudis