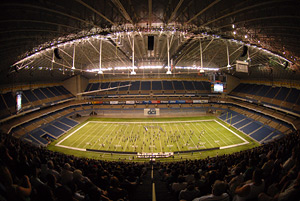 The Alamodome
Drum Corps International personality Steve Rondinaro has seen a lot of drum corps in his 30-plus years as veteran host of DCI's broadcast productions, but he's never started a season quite this way. In San Antonio, Texas last Saturday night at the DCI Southwestern Championship, "Reliable Rondo" sat with staff and show designers from each competing corps and had them discuss the ideas behind their productions, explaining what they were seeing and hearing from the field as fans followed along during a live Webcast on the DCI Fan Network. "It was fascinating," said Rondinaro. "I hadn't seen any events yet this season, so to sit there with some of the people who put those programs together was a pretty cool immersion. What a great way for fans to be able to dig deeper into the corps' programs before the World Championships in Indy. I'm really anxious to watch the corps again with that base of knowledge." Rondinaro joked that after learning so much from his discussions with some of DCI's top show designers, he now "might just be able to DeLucia a thing or two," giving a nod to the encyclopedic knowledge of DCI Hall of Fame member Dennis DeLucia who serves as his fellow color commentator on other DCI broadcast projects. In San Antonio, Rondiaro got the lowdown about which parts of the corps' shows are "works in progress" and got hints of changes to come. Most helpful were insights gained from staff members about the origins and inspiration of the shows and the many things to look for (and where to look for them) so fans can better appreciate what is happening when they see these corps perform later this season. All of those performances in their entirety with the designer commentary audio tracks have been recorded and posted to the Fan Network On Demand video section. They are available exclusively to Fan Network Plus subscribers. If you weren't able to watch the Webcast with the commentary, here's a rundown of some of the things you missed, but can now enjoy at your own leisure. Visit TheFanNetwork.org today!

The all-new DCI Fan Network gives you ultimate access to your favorite corps… At your fingertips… 24 hours a day! On top of free viral video content uploaded by corps video crews who are criss-crossing the country, Fan Network subscribers have it all, from unlimited access to the Drum Corps International audio/video vault, to live Webcasts from some of DCI's most exciting events, to on-demand replays of select corps performances available as the '09 summer season unfolds. Learn more about the DCI Fan Network and subscribe today!