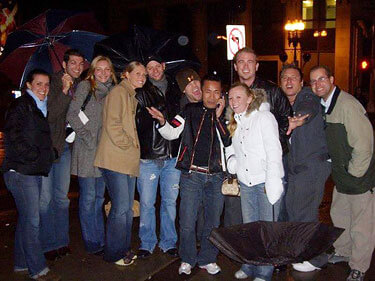 DCI friendships last a lifetime and the following picture is proof. New Year's 2007 was the third time that a bunch of us Cadet alums got together to celebrate the holiday and just have a great time being with each other. The following picture was taken in downtown Boston on New Year's Day of all of us who marched as members of the Cadets ranging from 1998-2006, plus an additional YEA! family member.

From left to right: Christen Juel, Jean DuGard, Kaysey Thompson, Karen Prince, Zach Schlicher, Brett Baker, Hieu Nguyen, Jarrett Lippman, Laura Rhatigan, Troy Weigand and Jason Ihnat. Honorary mention to Chris Vale, Kenny Isidoro and Will Plenk who weren't there because they left town early. And I could never forget our awesome camera man Nick Saputo, who offered to take the pic rather than be in it!

I love my Cadets family and can't wait until our new ritual of celebrating the Fourth of July takes place starting this summer.