In this season of giving, what better gift to give a prospective marcher than the gift of sponsorship? Mee Hee Kim has marched Colts due to the generosity of members of a corps that hasn't existed for the past three decades. The following is her story. I was sponsored this past summer and I wanted to share the impact that it had on my age-out year. My name is Mee Hee Kim and I marched three years with the Colts color guard (2000, 2003 and 2004). I am in my last year at the University of Illinois at Chicago as a biology/pre-med major. I have attached a picture of me with some of the age-outs of the Colts during the age-out ceremony in Denver. 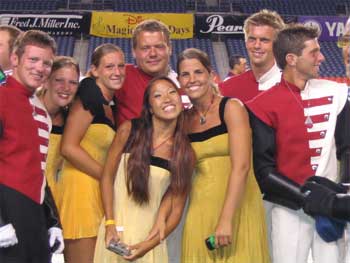