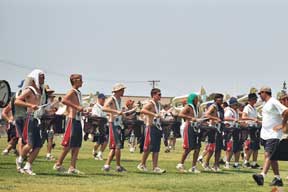 Ken Kilgus, a "longtime drum corps addict" (also a veteran of the Holy Name Cadets from 1947) who was originally from Garfield, N.J., and is now a proud parent of two Pacific Crest corps members (Kurt Kilgus of the 2001 horn line 2001 and Erica Kilgus of the 2001 color guard), submitted this one. It's a shot of the Pacific Crest snare line at the Memorial Weekend Camp at Los Altos H.S. in Hacienda Heights, Calif., on May 26, 2003. Kilgus is now a proud Pacific Crest parent and volunteer. We're running low on Forzato pics! E-mail your submissions -- and we will get to them all, in time -- to dave@dci.org along with where and when the photo was taken. Send some biographical information about yourself as well. We'll give you full credit. Also, let us know if you want your e-mail address included, to get feedback from other drum corps fans.